The most recent data collection covered the period from October to December 2016 inclusive and saw 9,431 contacts which all related to online issues. This was a rise on the previous reporting period (7,909 contacts) but reflects the beginning of the new academic year which seems to be a time when schools do some awareness raising around online safety issues. Once again, cyberbullying remains the issue which helplines are dealing with most often with around 18 per cent of calls relating to this. Helplines made specific references to cyberbullying and, in some cases, specific types of cyberbullying that they are seeing. Group cyberbullying was cited as particularly problematic as this can be difficult to address given that many of the groups which are being used are closed online groups and so not accessible to helpline staff. 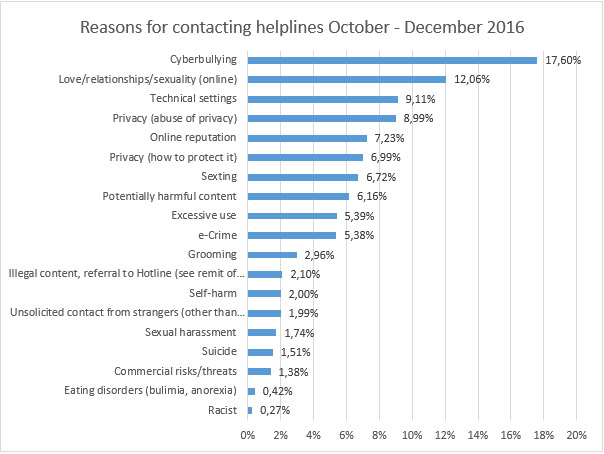 Once again love, relationships and sexuality accounted for 12 per cent of all calls across the network with young people talking about the pressure of online relationships.

More females contacted helplines during this period (60 per cent of calls were from girls and women), and 69 per cent of helplines received more calls from females than males. Helplines will discuss the ongoing challenge of engaging boys and males at a meeting in April 2017.

It is perhaps a sign of the times that the numbers of helplines offering counselling via online chat has increased. 73 per cent of helplines now offer chat services and 24 per cent of contacts are made in this way.

Other key findings include:

On Tuesday, 3 November 2020, four representatives from the Insafe network hosted a discussion on “The coronavirus pandemic: A global crisis is showing us how to live online” in a dedicated Internet Governance Forum (IGF) pre-event.