As part of the Erasmus+ international project CyberSafe MOOC “Building teachers’ competence about cyber violence against girls”, the Faculty of Social Sciences of the University of Ljubljana conducted a survey among headteachers in four European regions: Slovenia, Estonia, Northern Ireland and Crete (Greece). The online questionnaire researched the incidence of cyberviolence among 13 to 15-year-old pupils as recognised by headteachers.

Can headteachers detect cyberviolence in their schools?

With the exception of Northern Ireland, headteachers in the other three surveyed areas tend to detect traditional violence in their schools more easily than cyberviolence.

Headteachers were additionally asked how often they observed certain kinds of cyberviolence in their schools. The situation appeared to be very similar in all four participating countries. Namely, out of the three most frequently observed types of cyberviolence, there were at least two in all four countries, as these seem to be the most common among students: online threats of violence, spreading of rumours, online exclusion.

The table below summarises the key results from the online survey conducted on headteachers and highlights the most frequently observed types of cyberviolence: 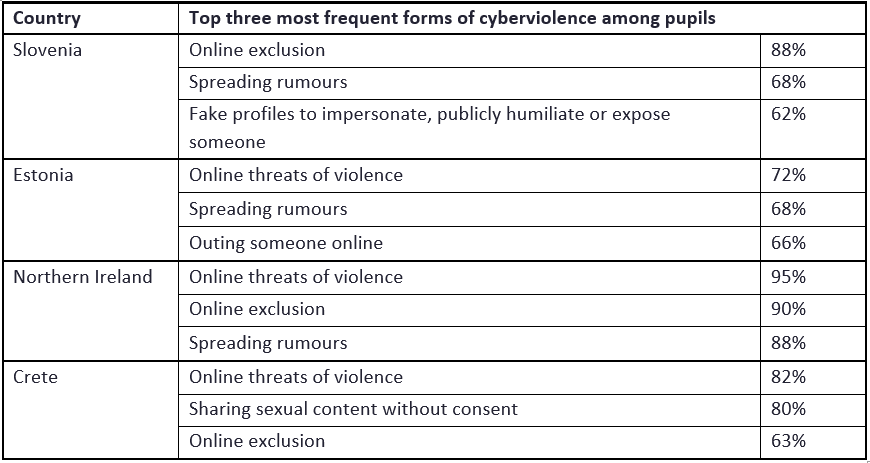 How do headteachers react to cyberviolence incidents?

The vast majority of the surveyed headteachers take action when they perceive cyberviolence incidents happening in their school. However, the actions taken vary substantially among countries.

In Slovenia, the most common course of action is to work with the students themselves. For example, one teacher might dedicate certain lessons – in which the whole class of pupils has to participate – to preventing and tackling cyberviolence, or the school counsellor is invited to talk to the students and raise awareness about cyberviolence.

Differently, parents and carers do get involved in Crete and Estonia: the most common course of action is to inform and/or invite the parents or carers of the affected students to a meeting with the class teacher or the headteacher. In Estonia, the school also takes measures to ensure that any inappropriate content is removed from the internet.

In Northern Ireland, however, the approach is quite different: the most common course of action is to support the victim after the incident of cyberviolence.

The festive season is finally here! As 2021 comes to end, once again facing challenging and unprecedented times, celebrations will kick off all over the world for the holidays. To look back on the past year and to celebrate the soon-to-come Safer Internet Day 2022 on Tuesday, 8 February, Better Internet for Kids (BIK) has prepared an interactive advent calendar full of useful resources and positive content.

Online shopping: read before you buy

Black Friday, Cyber Monday and the hunt for Christmas gifts are now upon us, and online shops are once again tempting buyers with discounts and special offers. BEE SECURE gives you some tips to prevent your enticing online shopping experience from ending in frustration.

This autumn, members of the Czech Youth Panel were given the task of devising a script for a short video on the topic of internet security. Subsequently, they stepped in front of the camera and, under the direction of Patrik Fiala and Martin Klesnil, who are shooting the successful podcast "At the round table" in the Czech Republic, experienced first-hand what it's like to be an actor.