European Get Online Week 2016: being confident, being digital

The seventh edition of the European Get Online Week (GOW) to digitally empower and employ people was celebrated on 14-20 March this year. With a record number of 29 campaign partners involved in 27 countries, the campaign proved again the necessity to raise awareness about ICT competence and the importance to see every European digitally savvy. Cisco and Liberty Global financially supported the campaign which was also endorsed by some of the European Commissioners.

Supported by tech companies and endorsed by the European Commission
The Digital Champion of the Netherlands Tineke Netelenbos said that "the Get Online Week is an excellent moment in Europe to collectively pay attention to enhancing eSkills". 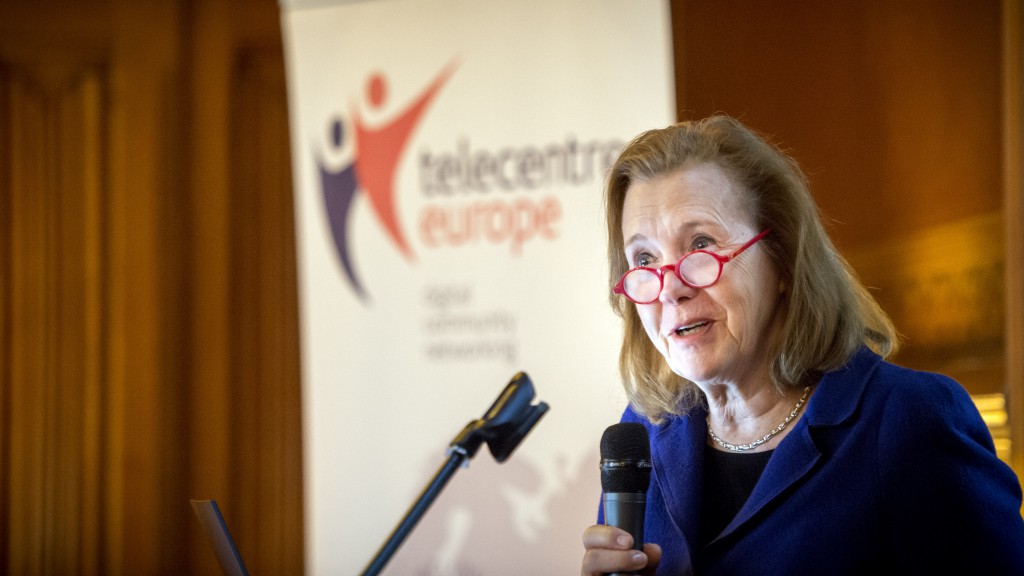 Digital Champion of the Netherlands Tineke Netelenbos Photo credits: Frank van Beek
The week-long initiative is organised by Telecentre Europe and its members every March since 2010. The Get Online Week was a major milestone of the eSkills for Jobs campaign from the European Commission. The new partnership with Cisco supported the national partners to tackle digital inclusion by teaching local communities basic IT knowledge using Networking Academy courses (www.netacad.com). Liberty Global has committed to supporting GOW and has been doing so each year since 2011, while Microsoft helped a part of national partners in local activities.
The European Commission increased support by endorsing the campaign on communication channels like blogs or social networks. European Commission's Vice-President for the Digital Single Market Andrus Ansip hosted a blogpost of Māra Jākobsone, chair of Telecentre Europe, on his official blog. "Europeans need the right skills to take part in the digital economy and get the full benefits from the Digital Single Market that we are building," A. Ansip said in the blogpost. During the campaign launch event in Amsterdam on 4 March, Alexander Riedl, Deputy Head of Unit from DG Connect, emphasized the fact that the Commission has been partnering with Telecentre Europe to reach out to 100 million Europeans who still have no or very limited digital skills.
Events on trust and confidence online
As trust and confidence on the internet is becoming a more complex and hard to address issue, the campaign partners organised events to educate people about cyber-security, online identities, e-commerce, social media, and ICT tools to become confident Internet users. 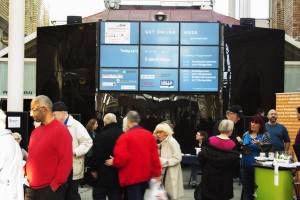 Sundsvall municipality invited citizens to the E-service Fair to inform about available public services online. Photo: Sambruk
Lithuanian partner Association Langas į Ateitį invited citizens to learn more about secure banking solutions and data privacy. Kids were given seminars on how to safely use the Internet. In Macedonia Open the Windows, in cooperation with the Directorate for Personal Data Protection, hosted a workshop in a high school where students were asked to formulate key recommendations for Internet safety.
In some Danish IT cafes senior age IT volunteers were teaching other hundred elderly people about e-commerce and the Internet safety. GOW partner in Latvia LIKTA organised a debate with ICT security experts from public, private and NGO sectors on the topic of security in digital world. E-service Fair took place in Sundsvall (Sweden) to inform citizens about different e-services the municipality has to offer.
Empowering young and unemployed
Europeans need the right skills to get the most out of the digital economy and digital single market. Thousands of events were organised to raise awareness about the skills gap and related employment opportunities. 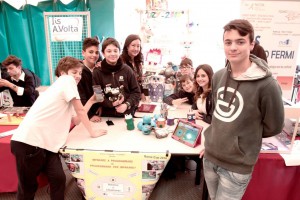 Kids attending the RomeCup event on educational robotics in Rome. Photo: Fondazione Mondo Digitale
Italian partners focused their efforts on training young people ICT and coding. In Parma in an event organised by ERVET students met and talked to digital experts such as digital content specialist, data analyst and food photographer who were promoting today's ICT career possibilities. The first National Robotic Olympic Games were organised by Fondazione Mondo Digitale in Rome.
In Croatia Telecentar run a number of workshops on multimedia literacy and roundtable discussions to figure out how to boost young people's employability. Web development course was organised for high school students by IAN Telecentre in Belgrade, among other events. Albanian Institute of Science introduced Skillage (www.skillage.eu/) and YouRock (http://yourock.jobs/) to young Albanians in high schools. 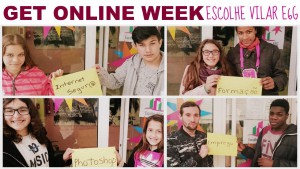 Campaign activities for young and unemployed in Portugal. Photo: Programa Escolhas
Spanish people in several regions joined workshops to learn about job search online and how to gain necessary skills for the job market. Spanish Association of Telecentre Networks held its 15th meeting of Telecentres featuring discussions on existing ICT initiatives and projects boosting employability and recently approved Digital Agenda of Galicia 2020.
Digital inclusion activities to teach basic ICT
A hundred million Europeans are still offline, therefore in some European countries digital inclusion is still very important. This is why Get Online Week continues to reach out to communities where internet is still a privilege. 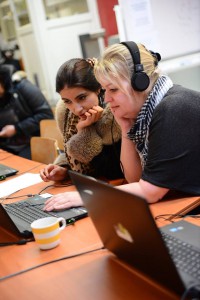 Roma women followed one-week workshop on digital storytelling in Brussels. Photo: Maks vzw
Foundation EOS Romania organized a dedicated GOW campaign launch in Timișoara to draw attention to the opportunities and benefits of online learning and the importance of internet access for all. Brussels-based non-profit Maks vzw involved Roma origin women in a one-week workshop to learn digital storytelling as a means to speak about their housing and work problems as well as violence against women and social exclusion. In Lisbon a group of seniors took their first steps to use Skype. This session aimed to show the elderly a new way to connect with the world and stay in touch with their relatives faraway.
GOW 2016 on social media
#GOW16 has been (maybe more than ever) one of the trending topics on Twitter and Facebook in Europe, with endorsements from two vice-presidents of the Commission (Andrus Ansip and Kristalina Georgieva), Commissioner Günther Oettinger, DG Connect, Digital Champion of Netherlands, ICT industry, EURES, EPALE and other European organisations. Almost 1,400 total tweets were sent out reaching to an estimate 3 million. Telecentre Europe's messages on Facebook reached more than 5,100 people and resulted in over 12,200 impressions just in one week.
Check Storify to see the highlights of conversations on Twitter!
This blog post was originally published at the Get Online Week website and is republished here with permission. Read the original article.
Share article: