The good, the bad and the urgent – tackling information disorder

On Thursday, 11 June 2020, at the European Dialogue on Internet Governance (EuroDIG 2020), the Insafe network of European Safer Internet Centres (SICs), represented by Sabrina Vorbau, Project Manager at European Schoolnet (EUN) and Youth Coordinator on the Better Internet for Kids (BIK) project and Joachim Kind, Head of EU Networks at the Media Authority of Rhineland-Palatinate (LMK) and spokesperson for the German Safer Internet Centre (SIC), hosted a workshop on "Social media – opportunities, rights and responsibilities", looking at the limitations and pitfalls of freedom of speech on the internet from multiple stakeholder perspectives. In this article, Tanja Pavleska from the Laboratory for Open Systems and Networks, Jozef Stefan Institute, Slovenia, examines some of the challenges encountered by the initiatives combating disinformation.

Information disorder is an umbrella term for three distinct, but related phenomena: disinformation, misinformation and malinformation. These are commonly known under the names of fake news, rumours, doxing, harmful content, and so on. Many efforts to combat information disorder have been taken, as it is directly related to some of the most important aspects of our daily lives: guarding democratic and societal values, nurturing trust in the actors involved in establishing those values, exercising fundamental rights and freedoms, and similar.

In a recent study carried out as part of the H2020 EU project COMPACT, 146 initiatives across 24 EU countries were analysed for their governance practices in the combat against information disorder. Although this is not the exhaustive set of initiatives active in that regard, it allowed very valuable insights into the current state and the possible steps for improvement. The range of initiatives relevant in this sense is wide. The following picture shows the major stakeholders that act in this direction: 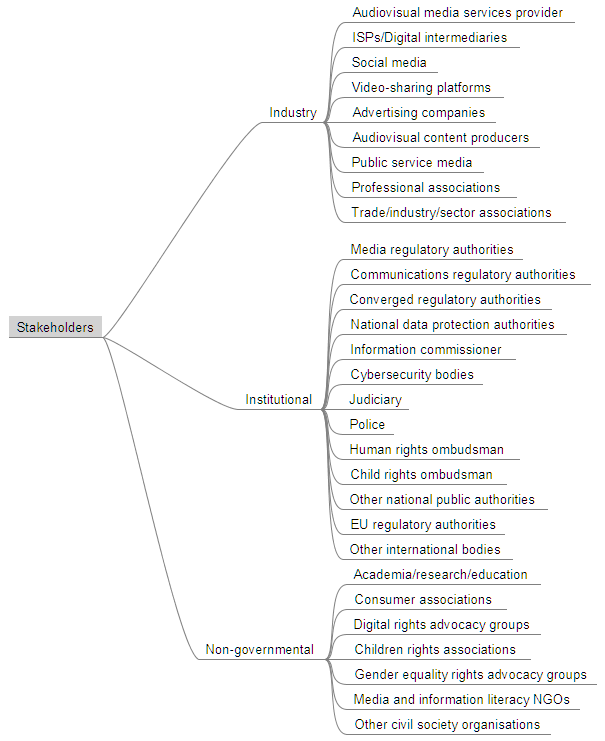 Figure: (Sub)types of the main stakeholders in information disorder governance

The initiatives were analysed based on a framework (designed specifically for this purpose) of criteria and sub criteria, like: conception and implementation (scope, openness, multi-stakeholder inclusion), mechanisms for monitoring and impact, regulatory implications, extent of technology employment, addressing of fundamental human rights, presence of transparency and accountability safeguards, financing schemes, incentives and sanctioning mechanisms, State involvement, and so on. These findings are structured into a narrative of Good and Bad practices, based on which recommendations for Urgent interventions are suggested.

One of the positive results from the study is the amount of effort put into raising public awareness on the issues related to information disorder. This is mainly done through social media interactions with the general public, as well as through the dedicated websites and tools which the initiatives provide. In addition, organising public events, campaigns, workshops and trainings are among the most effective means employed to gain public attention and obtain immediate feedback on their understanding of and reasoning about the issues.

Another positive trait of initiatives' work is the addressing of several fundamental human rights, the prevalent of which are freedom of expression and the right to non-discrimination. However, since the beginning of the COVID-19 pandemic, protection of minors, freedom of assembly and the right to private life have also gained more exposure through the initiatives' activities.

The "bad" here does not refer as much to failed efforts in the combat against information disorder as it denotes misshaped practices and principles for realisation of the initiatives' objectives. These practices can be seen in several contexts: in the conception, in the implementation and in the self-evaluation. The following findings best capture the need for immediate intervention:

The low multi-stakeholder involvement and the lack of coordination significantly affects the effectiveness of the invested efforts, leading to higher expenditures, redundancy of efforts, low incentives for stakeholders' involvement and inefficient awareness-raising efforts. Therefore, networking platforms are needed to facilitate the alignment of the initiatives' objectives and bootstrap a process of self-coordination and involvement in trans-border activities.

The large under-representation of the gender, children and digital rights activists significantly limits the debate on the issues arising from information disorder. This, in turn, affects the consistency and the "all-encompassing" nature of the policies that are being drafted to tackle the problems. Thus, not only the inclusiveness should be improved, but proper incentives for general stakeholders' inclusion should also be offered to provide sustainable mechanisms for combating information disorder.

The poor technology employment affects the performance of the work but, moreover, it decreases the reliability of the working methodologies heavily packed with subjective elements. Ultimately, it may undermine the trustworthiness of the initiatives themselves. Hence, broadening of the methodological means for combating information disorder is crucial, by developing open solutions that account for the entire information lifecycle (from creation, through distribution and storage, to destruction), regardless of content and form (text, video or audio).

The absence of accountability and transparency safeguards affects the trustworthiness of the initiatives, undermining their objectives and efforts to accomplish them. Therefore, targets and indicators for self-evaluation should be determined and monitoring should be conducted in an open and autonomous way. Each stakeholder should also monitor its performance within the scheme against the objectives and the targets set. This will build trust among the stakeholders and will also provide incentive for participatory functioning. Finally, any financial support should be transparent in order to maintain the public trust and, with that, the trust in the democratic processes the initiatives are supporting.

It is important to note that the findings presented here are highly context-dependent, and some are even country-specific. This implies that the adoption of potential legislation addressing the above issues will probably happen at national level and will depend largely on the state of information disorder governance within a particular country. However, coordination at EU level must exist, accounting for the evolution of information disorder phenomena, as well as the knowledge gained by the implementation practices within the separate countries.

The Laboratory for Open Systems and Networks was established in 1992. The focus of its activities is on research and development of next generation networks, telecommunication technologies, components and integrated systems, and information society services and applications. Find out more on the Institut "Jožef Stefan" website.

The above article was written by Tanja Pavleska and is published here with permission from the author. The views expressed do not reflect those of the Better Internet for Kids (BIK) Team nor of the European Commission (EC).