The German Awareness Centre klicksafe proudly looks back on a very successful Safer Internet Day (SID) in the country. In 2020, more than 240 events took place across Germany, focusing on a variety of different online safety topics.

Yet, the main focus of this year's SID campaign was on "Idols online. Influencers and power of opinion". In the run-up to Safer Internet Day, klicksafe therefore published two new materials on YouTube – one with tips for parents, and a teaching material with lesson plans for the classroom, so that teachers are provided with materials to talk to young people about influence on the internet. As usual, the new materials, so far only available in German, can be downloaded on www.klicksafe.de.

On Safer Internet Day, klicksafe also published the results of a non-representative online survey carried out among young people aged 13-20 to find out more about their views on social media and the role of influencers on their opinion. About one third of the 600 young people who answered the survey believe that influencers do shape their opinion-making process – which is similar to the influence teachers have on them. Slightly more than half of the young people consider influencers to be role models who should be committed to affecting social change. The number one issue which should be on their agenda according to the participants is the protection of the environment. Although almost all young people know and use social media services, less than 10 per cent express the wish to become an influencer themselves. 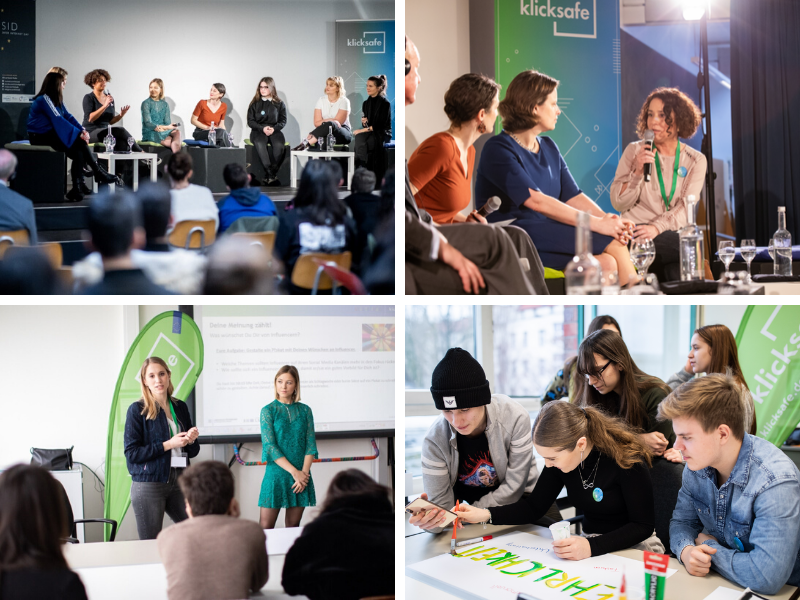 The main Safer Internet Day event in Germany was a press conference at Friedensburg Oberschule Berlin on the morning of Tuesday, 11 February 2020. Over a hundred high school students participated in the event as well as representatives from different sectors, including policy and industry. As the motto suggests, various famous influencers also took part in the event and talked about their views on the responsibilities of content creators.

The day kicked off with workshops in which pupils created posters with demands for the photoshoot, followed by a Q&A session with two of the influencers, Diana zur Löwen and Charlotte Kuhrt.

During the press event, which was opened by Dr. Marc Jan Eumann from the Media Authority RLP, Juliane Seifert, State Secretary at the Federal Ministry for Family Affairs, Senior Citizens, Women and Youth discussed the role of youth protection and responsibility with David Miles, Safety Director at Facebook/Instagram, Birgit Kimmel, head of klicksafe, and Dr. Tobias Schmid, Director of the Media Authority NRW.

The influencers also got the chance to speak up and express their views on their role and how they deal with societal and political topics.

In addition to the press event, klicksafe successfully rose awareness of online safety topics on national television, including appearances on breakfast television MOMA and in the morning news of the popular Tagesschau programme.

In summary, it can be said that Safer Internet Day 2020 ties in with previous editions in Germany, and the German Safer Internet Centre was very successful in reaching out directly and through the media to many people in the country to think about checking who they follow online.

From 26 to 30 June 2022, a group of about 200 young volunteers (Young Informants) in information and awareness raising initiatives from Portugal and Spain met in Mollina, Spain to share good practices and discuss different online safety issues related to their volunteer activities.

Today marks International Youth Day 2022. Every year on 12 August, the day is celebrated all around the globe. The day was initiated by the United Nations (UN) in 1998, to bring youth issues to the attention of the international community as half of the people on our planet are 30 or younger, and this is expected to reach 57% by the end of 2030.