The study involved a sample of 13,000 pupils aged 10-18, from approximately 500 schools in Attica, Thessaloniki, Evros, Ioannina, Heraklion and the Dodecanese Islands. 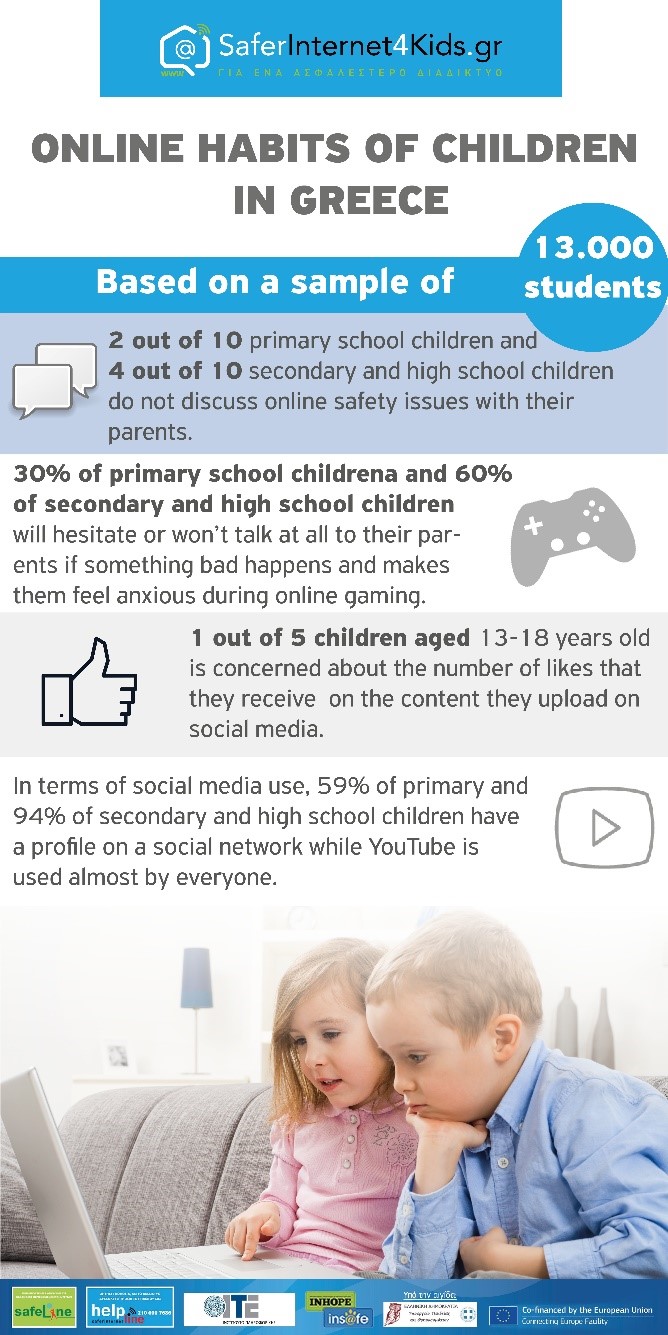 A particularly striking result of the study is that 2 in 10 primary school students and 4 in 10 secondary school students do not discuss issues of safe internet use with their parents, while a large percentage of parents continue to set no limits, either on the time children spend online or the content that they are allowed to access. As it turns out from the children's responses, many parents do not even know what their children are doing while they are online.

On the other side, 30 per cent of primary school pupils and 60 per cent of secondary school pupils will hesitate to, or not tell their parents if something happens and upsets them during an online game, mainly because they feel that parents are not concerned or because they fear being banned from online gaming, and also because they think their parents do not know how to help them.
One of the topics the survey focused on was the degree to which children are influenced by what they see on social networks. According to the results of the survey, 2 in 10 children aged 13-18 are worried about the number of likes they will receive on content they upload to social networks, 19 per cent have deleted a photo that did not receive a sufficient number of likes and 28 per cent systematically use filters in the photos they share.

The main objective of the research carried out by the Greek Safer Internet Centre SaferInternet4Kids of FORTH was to map children's online habits and to draw safe conclusions to serve as guidelines in planning the centre's awareness policy for children, parents and educators. The purpose of this survey, along with that conducted in 2018/19, is to be used in a more general cohort study that examines the changes in perceptions and online habits of the analysis' units over time. At the same time, since it is the largest sample survey of such a content at a national level (along with the previous one), it can also be a policy-making tool from decision-making centres, such as the Ministry of Education, in informing and educating students about the safe use of internet. In any case, it is a useful tool in the hands of the educational community as research reveals the distorted habits of children using the internet, which can lead to difficult or even dangerous situations.