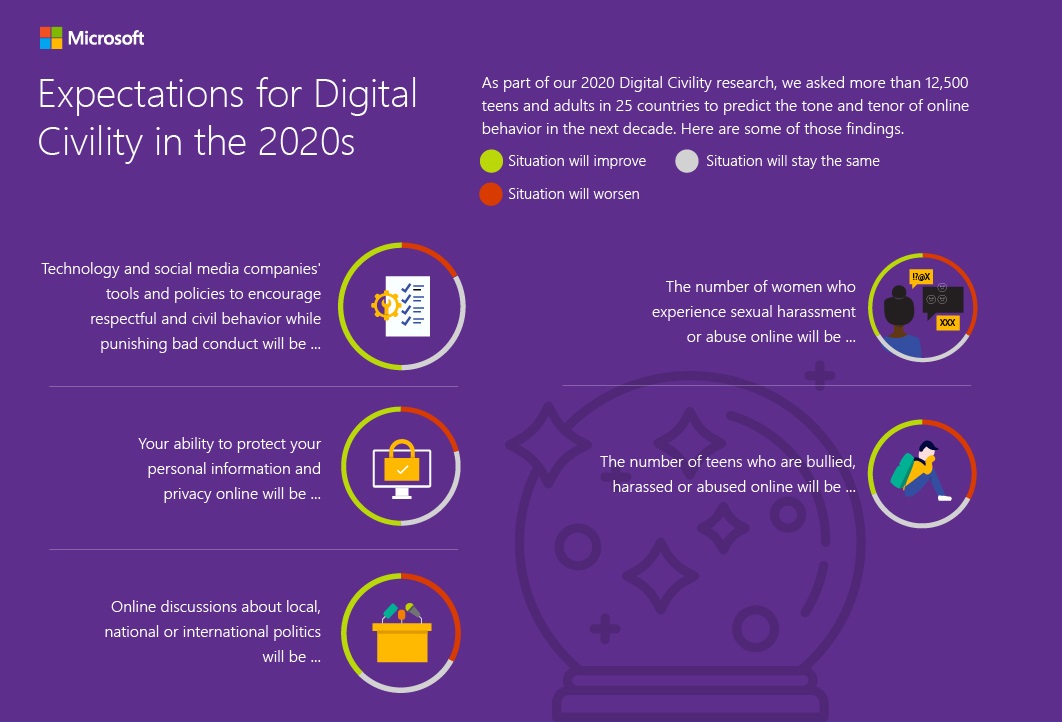 For the past four years, Microsoft has been invested in research as part of a campaign to promote digital civility – safer, healthier and more respectful online interactions among all people. With the advent of the new decade, we wanted to enhance that work and seek insight into people's "2020s vision".

Respondents were asked to select three words to best describe what they hope will come to define online experiences and digital interactions over the next 10 years. "Respect" was by far the preferred option, chosen by two-thirds (66 per cent) of participants. "Safety" followed at a rather close second (57 per cent), while "freedom" (33 per cent), "civility" (32 per cent) and "kindness" (26 per cent) rounded out the top five. "Empathy" was the only other choice to receive more than 20 per cent of the vote – 21 per cent precisely. Meanwhile, "well-being," "inclusivity," "health," "compassion" and "curiosity" all scored between 11 per cent and 15 per cent.

In addition, survey participants were asked to pull out their crystal balls and predict the tone and tenor of online behaviours in the next decade, particularly with respect to some specific — and sometimes troubling — scenarios. Here are some of their responses:

The latest study, "Civility, Safety and Interaction Online – 2019," polled teens aged 13-17 and adults aged 18-74 about their exposure to 21 different online risks across four categories: behavioural, sexual, reputational and personal/intrusive. This research builds on similar studies about digital civility that Microsoft has conducted in each of the last three years. The 2019/2020 installment polled respondents in 25 countries, up from 14, 23 and 22 countries from 2016 to 2018, respectively. A total of 12,520 individuals participated in this study, and more than 42,000 people were surveyed on these topics since the start of this work. Full results of this poll, including the release of the latest Microsoft Digital Civility Index, will be released on Safer Internet Day – on Tuesday, 11 February 2020. 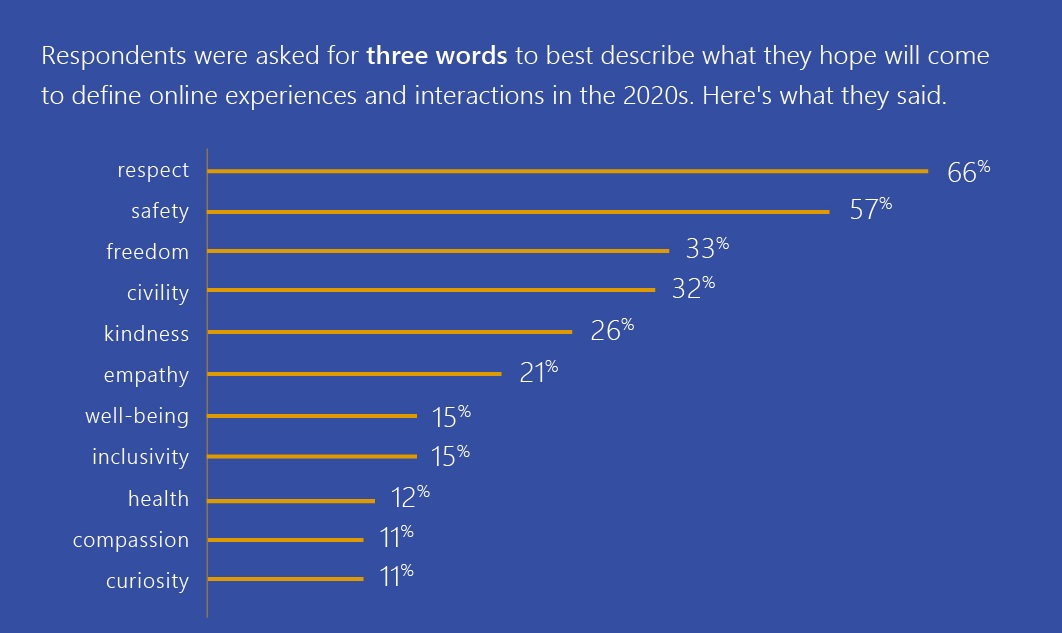 Looking ahead to 2020 as a single year, respondents were less encouraged about making significant progress with respect to civil online behaviour. For instance, nearly 4 in 10 feel unwanted online contact (39 per cent), bullying (39 per cent) and unwelcome sexual attention (39 per cent) will worsen this year. A slightly smaller percentage (35 per cent) expect people's reputations, both professional and personal, will continue to be attacked online. One quarter (25 per cent) of respondents see improvement across each of these risk areas in 2020.

Still, those percentages show significant improvement from respondents' assessments of the current state of digital civility. Among the countries surveyed, more than half of the respondents rated the current situation as "poor" in terms of people being contacted online without their permission or consent (60 per cent), individuals being bullied, harassed or abused (51 per cent), and people being solicited with unwanted relationship requests or sexual advances (51 per cent). A lesser percentage (46 per cent) see people's reputations being sullied online.

So, what can we do to improve global digital civility as we kick off the 2020s? As the new year and new decade begin, it seems an appropriate time to consider a new year's and perhaps even a new decade's resolution. As has been done throughout the span of this research, Microsoft is once again calling on youth, teens and adults across the globe to sign onto the Digital Civility Challenge and pledge to live by four basic tenets for life online to encourage kinder, more empathetic and more respectful interactions. Specifically:

These may sound like practical, common-sense pieces of advice — and they are. Too often in recent years, however, they appear to have fallen out of favour, as shock value and social comparisons fuel the chase for "likes" and "followers." For evidence of this, look no further than the sentiments and work of members of the teen Microsoft Council for Digital Good. These young people and several others like them have committed to turning this tide. In 2020 and beyond, let's hope many more follow.

In February, when the complete research findings are made available, the latest reading of the Microsoft Digital Civility Index will also be announced, a global and country-by-country measure of civility as reported by citizen-respondents. The index measures the perceived level of online civility in a specific country based on the reported level of risk exposure of individuals in that country. The index works like a golf score: a lower reading equates to a higher level of perceived civility. In the prior three years, the index held relatively steady, averaging 66 per cent — an indication of both risk exposure and digital civility — despite changes each year to both the number of countries and the various risks included.