Best practices on digital inclusion and literacy for all

The Portuguese Safer Internet Centre (SIC) was invited to give a presentation at the 13th International Conference – Keeping children and young people safe online that took place in Warsaw, Poland, on the Tuesday, 17 and Wednesday, 18 September 2019, on the topic of "Digital Inclusion and Literacy for All".

During the conference, the SIC Coordinator, Sofia Rasgado, had the opportunity to talk with Rebecca Krauss and Martin Bregenzer from klicksafe and share some ideas on the topic.

What does digital inclusion actually mean?

When we talk about digital inclusion and literacy for all, we are talking about creating a more resilient society with new competences, in particular digital ones that, as we know, are constantly changing and evolving. Nowadays, many social interactions happen online and are mediated by electronic devices. As such, acquiring these basic digital skills is part of exercising a full citizenship.

Therefore, the concept of digital competences is understood on a broad manner. It includes the notion of digital literacy, meaning the ability to access digital media and ICT, to understand and critically access contents and to communicate effectively.

Has this topic received enough attention? What can be done?

We want to ensure that the whole population has the skills, competences and means to use and benefit from digital technologies to participate in a networked society, which is the goal of Action Line 1 – Inclusion. The Portuguese SIC contributes to the development and implementation of this line of action and makes every effort to promote digital literacy in an open and inclusive way. 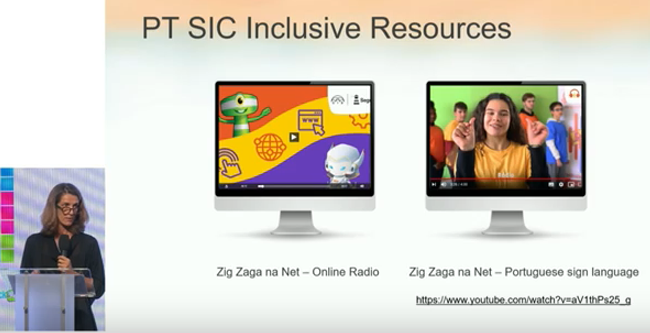 And from the side of the Portuguese SIC, which initiatives have been taken to accomplish this objective?

The Portuguese SIC focuses on producing inventive, educational and appropriate tools, resources and campaigns to engage and motivate all the community for their own online safety. Two years ago, they launched "Net with Conscience", a webseries focusing on several topics regarding online safety. It covers the story of Joana and João, a couple of Portuguese teenagers who are regularly visited by their online consciousness, which interacts with them explaining why some things can be riskier than others.

To develop its contents and features, the Portuguese SIC took into account the need to make it available in Portuguese sign language and Portuguese audio description, so that deaf and blind pupils could also understand the online Safety contents.
To further pursue this goal of producing pedagogical resources and content accessible to vulnerable people and useful for all, the Portuguese SIC developed, in 2018, "Zig Zaga na Net" in partnership with SeguraNet and the Public Radio Station – Antena 1.

The resource is about several online safety topics, such as: rights and responsibilities online; copyright; misinformation and fake news; privacy; digital footprint; online and technology addiction; safe online behaviour; bullying and cyberbullying, among many others.

This resource was designed in a universal perspective with the goal of reaching all pupils, meaning that to have quality resources, it is necessary to work for and with the target group; it is not enough to have the contents translated to Portuguese sign language after they are finished. Instead, it is about building the resources with this universal perspective frame of mind from the beginning.

The Zig Zag website includes an online radio made for children aged 5-9. The radio programmes include several pedagogical items, namely contents from the national basic education curriculum. In this context, the Portuguese SIC was invited to develop new contents about online safety.

To create the content for the 30 episodes, they collaborated with a writer for children who, in a playful and pedagogical way, presented a story, represented by a family and friends, where the guiding thread is online safety, regarding not only the risks they may face, but also the benefits of being online.

In the episodes, the characters are escorted by the awareness centre's mascots - INES and Pisca - that are called to intervene and to collaborate in solving the problems that the characters face or to suggest them tips about online safety.
To record the voices of the radio online episodes, the Portuguese SIC worked with children and young people from different schools and to translate the resources into the Portuguese Sign Language, they invited the reference school for deaf students Quinta de Marrocos School in Lisbon.

This project was pioneer because deaf students could be included from the beginning and participate in its production. The contents were produced in the classroom by the teacher and the students, rehearsed and filmed by the public television. The content is available online and anyone can see or use it in awareness sessions.

The online series "ZigZaga na Net" was launched on February 2019 as part of the Safer Internet Day celebrations. Since then, each month, three new episodes become available for streaming on the Zig Zag online radio.