The spread of fake news is a frequent occurrence on the internet, but the emergence and popularity of social networking services has made its spread even more prevalent. Fake news, even that which clearly does not contain a trace of reality or logic, is now transmitted at the speed of lightning through social media, resulting in familiarity and acceptance of the so called news by a large proportion of the audience.

Increasingly therefore, each of us has a responsibility to check the source of every piece of information we receive, to understand the aims and goals of the specific media, to analyse the content beyond what we read, to check the identity of the news editor, and to compare different sources of news before drawing any conclusions. In brief, the answer to tackling the phenomenon of fake news is the cultivation of critical thinking.
From November to December 2018, the Greek Safer Internet Centre (SIC) conducted some research, in cooperation with the Greek Ministry of Education, involving 14,000 students, aged 10-18, from 400 schools in the country. According to the results, 58 per cent of children are informed by content on social media, 26 per cent read the news on news websites, and 16 per cent read news from other sources. Additionally, 58 per cent of children think that they are able to distinguish fake news online, 30 per cent think that they can only distinguish fake news when it is really obvious, and 12 per cent think that they are not able to distinguish fake news. 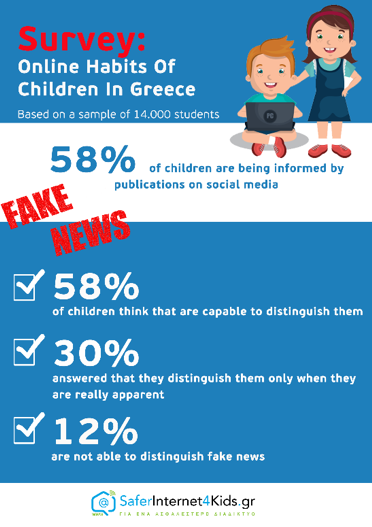 Survey of online habits of children in Greece
According to a 2018 Eurobarometer survey, more than half of Greek people (55 per cent) believe that they encounter fake news or fake information that either misleads them about reality or is totally false every day or almost every day. Three out of four Greek people (74 per cent) say they encounter fake news at least once a week. This figure is the highest among all of the countries of the European Union and shows the Greek peoples' lack of trust in the news.
In response to the question "How competent do you think you are to recognise a fake story?", two out of three Greek people (64 per cent) say they have full or a lot of confidence that they can, while one in three (35 per cent) has little or no ability to distinguish misinformation online. The corresponding average rates in the EU are 71 per cent (trust) and 26 per cent (lack of confidence).
In an effort to inform and awaken children, in particular, about media education and to teach them how to distinguish the truth from lies on the internet, the Greek Safer Internet Centre has created a video for teenagers, by teenagers. In the video, students explain (in Greek) the meaning of fake news and the ways in which to easily distinguish it.
As part of an awareness campaign that took place from 18-22 March 2019, to coincide with European Media Literacy Week, the Greek Safer Internet Centre sought to sensitise children and parents to the special importance of media literacy in our lives, through social networks, updates to schools, and dissemination of related educational materials such as quizzes, posters and brochures.
Download the Greek Safer Internet Centre's resource on fake news (in English) from the saferinternet4kids.gr website. 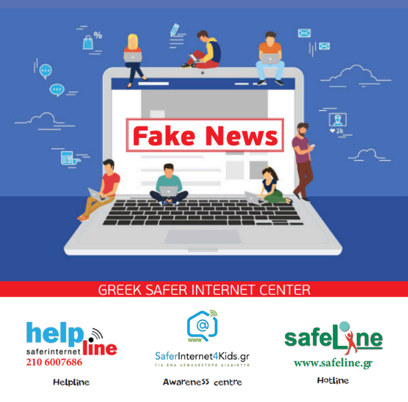