One of the focus topics of the #SaferInternet4EU campaign, launched on Safer Internet Day 2018 by Mariya Gabriel, Commissioner for Digital Economy and Society, is cyber hygiene... that is, taking steps to ensure that your online life is healthy and secure. Read on to find out more about "CyberReadyGame", an awareness-raising board game developed by the European Commission's Directorate of IT Security, part of the Directorate-General for Informatics (DG DIGIT).

The "CyberReadyGame" is an awareness-raising board game developed by the European Commission's Directorate of IT Security, part of the Directorate-General for Informatics (DG DIGIT). The aim of the game is to pass specific cyber knowledge from experts to non-experts by creating mixed teams and by engaging in various scenarios. It is easy to adapt to all age groups and roles. This approach offers a good learning method to upskill on cyber security awareness in both technical and non-technical matters, learning from each other through play while also creating possible future communities of practice. By following the below design, a good facilitator can organise it in his or her own ecosystem.

How does it work?

The time to play depends on the number of team members, but it is estimated that a minimum of 30 minutes is needed to complete the game. Anybody can play it, and there is a minimum of four players. You need a facilitator with good understanding of cyber security, and potentially one or two IT security experts or enthusiasts but this is not mandatory. The facilitator sets the tone and employs the scenario that fits best the players.

Players are split into two teams: Blue Hat team (defenders) versus Red Hat team (attackers). Each team receives the same scenarios, but are given different tasks. The game is facilitated by a trainer. 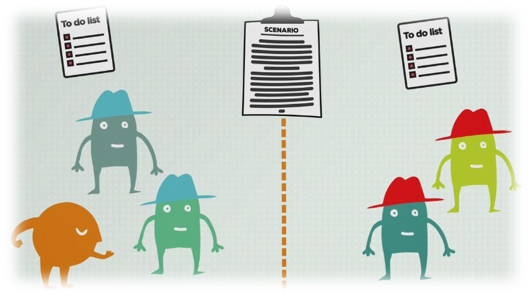 Below is a checklist of step one and step two in order to organise a round of CyberReadyGame play.

Step 2: Round of play

Examples of keywords used in the game

Examples of scenario (to be tailored and updated by the facilitator)

1. Imagine your organisation is a public transport provider. You just got hacked and 100 buses stopped working in different city stations. In your team, consider:
2. Imagine your family has five devices connected to the internet. One day, the police knock at the door saying that all your devices were part of a network of serious online crime. In your team, consider:
Find out more in the video trailer created for the game:
This resource was created by the Directorate of IT Security, Directorate-General for Informatics (DG DIGIT) and openly available from the kick-off of European Cyber Security Month 2017 and is published on the Better Internet for Kids (BIK) portal with permission.
The next edition of European Cyber Security Month (ECSM) will take place in October 2018 - find more information on the ECSM website.
Share article:

Background, foundation and development of the Safer Internet Ambassador network in Lithuania

The 21st century is an age where digital technologies are evolving at an enormous pace and changing people’s lives, work, and social interactions. Digital technologies offer several opportunities for improvement, including faster access to information, a more diverse and wider communication and collaboration network, easier access to knowledge – but also new challenges and risks.

“HTML Heroes: Welcome to the Internet” was officially launched in September 2021 by the Irish Minister for Education, Norma Foley TD. She commented: “To best equip children and young people to make the most of the internet, we need to begin from an early age. Like road safety, children need to know the basics of accessing the internet, how to use it effectively and safely, and to know what to do if something goes wrong and where to get help and assistance. It is my hope that this new programme from Webwise will help teachers and school staff build these foundations with pupils in an age-appropriate manner. Through colourful illustrations, stories and an online safety code that reinforces key safety messages, the new HTML Heroes Programme for first and second class is an excellent starting point for children”.