With forecasts indicating that by 2020, 20.4 billion connected devices would be in use online (compared to 8.4 billion at the end of 2017), Commissioner Gabriel took this opportunity to highlight the vital role that sits with policy makers: from education to cybersecurity and cyber-hygiene, families and schools must be supported in learning how to be citizens in a digital society.

Against this background, Commissioner Gabriel launched #SaferInternet4EU, an awareness campaign aimed at fostering digital culture among children and young people. The campaign will encompass initiatives running throughout 2018 and will cover a wide range of topics, including critical thinking, media literacy and digital skills necessary to identify and combat fake news, seek trusted sources of information and reinforce cyber hygiene.

Commissioner Gabriel emphasised the desire for young people to actively take part in this initiative and to become #SaferInternet4EU Ambassadors by spreading the messages of the campaign to their peers. 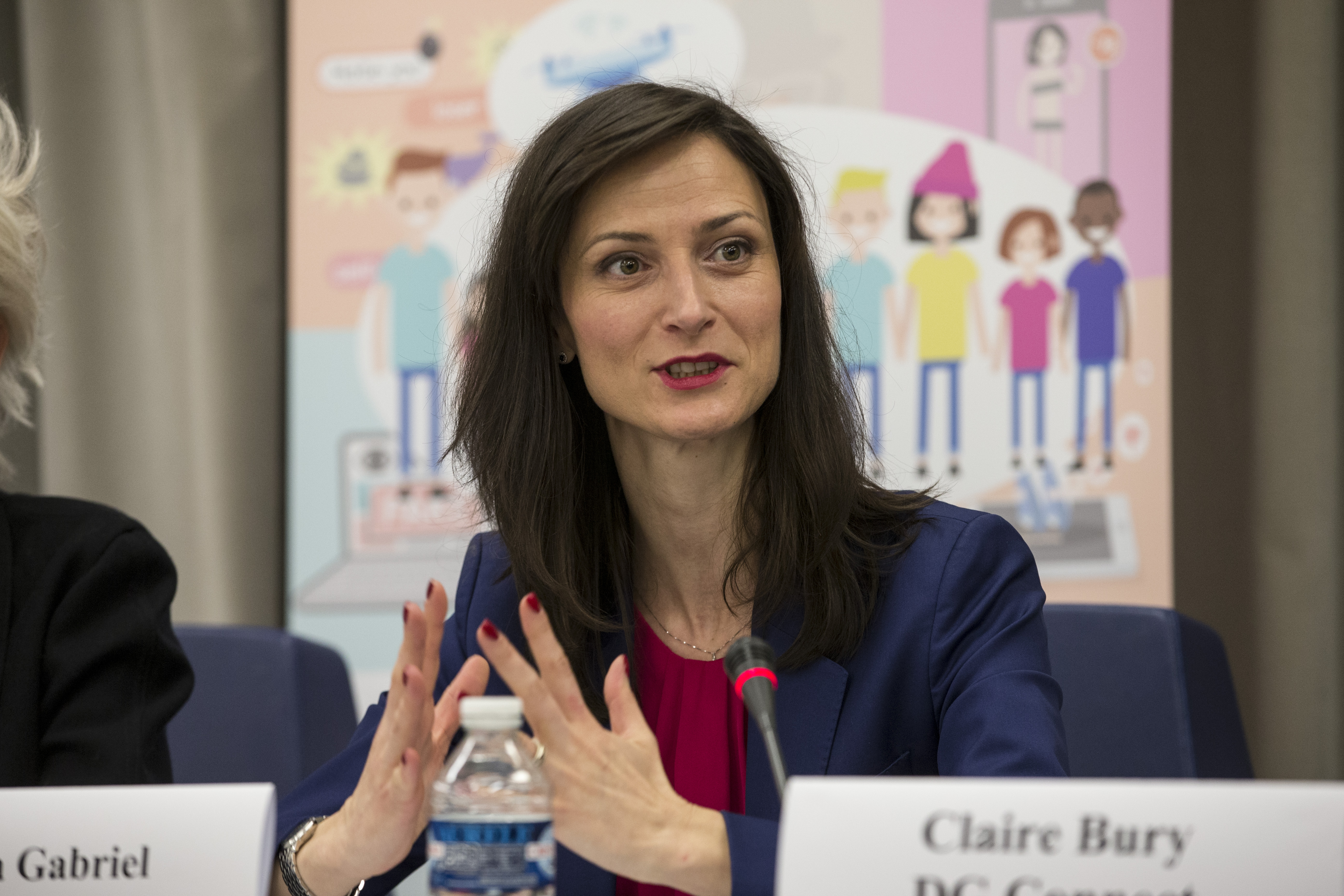 After the opening address, pupils from the European School in Strasbourg presented their perspectives on the main online safety risks and opportunities currently encountered by youth. Referring to fake news, they stressed the importance of checking and cross-checking sources, while also looking at issues concerning confidentiality and privacy. They also emphasised the importance of avoiding the dark web, with concrete examples such as using VPN instead of browsers like TOR. As for social media and sexting, pupils debated issues surrounding online services and privacy policies, emphasising that it's important to report any inappropriate behaviour and reach out for help (such as via helplines) if issues are encountered. Furthermore, the pupils acknowledged the importance of Safer Internet Day for raising awareness among their peers of online safety, which should then be adopted within everyday online behaviour.

Continuing the discussion around a Better Internet for Kids (BIK), Brian O'Neill from EU Kids Online presented the results of the recent BIK Policy Map study. Following a complex mapping exercise in EU Member States looking into best policy practices for better internet (for kids) policies, a report has been compiled which includes country sheets and legislative findings. More information will be shared on the BIK portal soon in an interactive format highlighting policy frameworks and BIK indicators.

The event continued with a series of presentations on the activities and initiatives of Safer Internet Centres (SICs) in Europe, with representatives from Austria, Belgium, the Czech Republic, Luxembourg and Germany.

The Austrian SIC delegation offered a reflection on challenges of safer internet use for young children and the challenges that parents and teachers face in fostering digital media literacy and safer use of internet.

Focusing on one of the challenges identified recently by the European Commission, namely cyberbullying, Gabriel Ouli, Project Manager of the Belgian SIC, and Chiara, Belgian youth panellist, presented some of the activities offered to Belgian schools, including a theatre play tackling the topic of sexting, which has been delivered in Flemish schools and is now being translated into French. The Belgian SIC representatives also announced the initiative of her Majesty the Queen of Belgium, who has produced a video after meeting with victims of bullying.

The audience was then introduced to the "awareness by fun" activities of the Czech SIC, and in particular a cartoon book and a memory game tackling online safety topics.

Continuing the focus on a positive approach, representatives of the Luxembourgish SIC demonstrated activities focusing on creativity, peer-to-peer learning and learning by doing, such as the "DigiRallye" and maker movement events and workshops for children in Luxembourg.

The delegation from the German SIC focused on the added value of the Insafe network on the work of the national Awareness Centre. As a strong and reliable network of various partners across Europe, Insafe also plays a key role as both a mediator and negotiator at national and EU level.

In order to see how other Safer Internet Centres across Europe were celebrating Safer Internet Day, a video link was established with two SID events in Italy and Bulgaria where Commissioner Gabriel had the opportunity to address participants directly. She also heard from students in Bulgaria on their experiences with working on a mobile application providing quick access to the SIC's helpline and hotline services, along with a password strength checker and a test to check one's knowledge on safer internet issues.

Following this, the Commissioner witnessed the opening of a SID event in Rome, hosted by the Ministry of Education and the Italian Safer Internet Centre with more than 600 students, launching a new animated video "Super Errori", raising awareness about common mistakes online.

Complementing the discussion from the European Parliament perspective, MEPs Anna Maria Corazza Bildt, Caterina Chinnici and Silvia Costa reiterated the support of Intergroup for Children's Rights for a better internet for children and youth, working together with the legislators on topical dossiers such as the Audiovisual Media Service Directive (AVMSD) and combatting child sexual abuse.

Following this set of interventions, Commissioner Věra Jourová participated in the discussion bringing in the European justice perspective and highlighting the importance of prevention (through more education), protection (understanding vulnerabilities and offering data protection support) and punishment (working with the relevant stakeholder – including IT companies – to apply sanctions when necessary).

Closing the event, Commissioner Gabriel highlighted that creating a better internet is a shared responsibility where everyone has a role to play. Industry, policy makers, parents, schools and educators, and children and young people, can all contribute to sharing (offline) values in the online world. 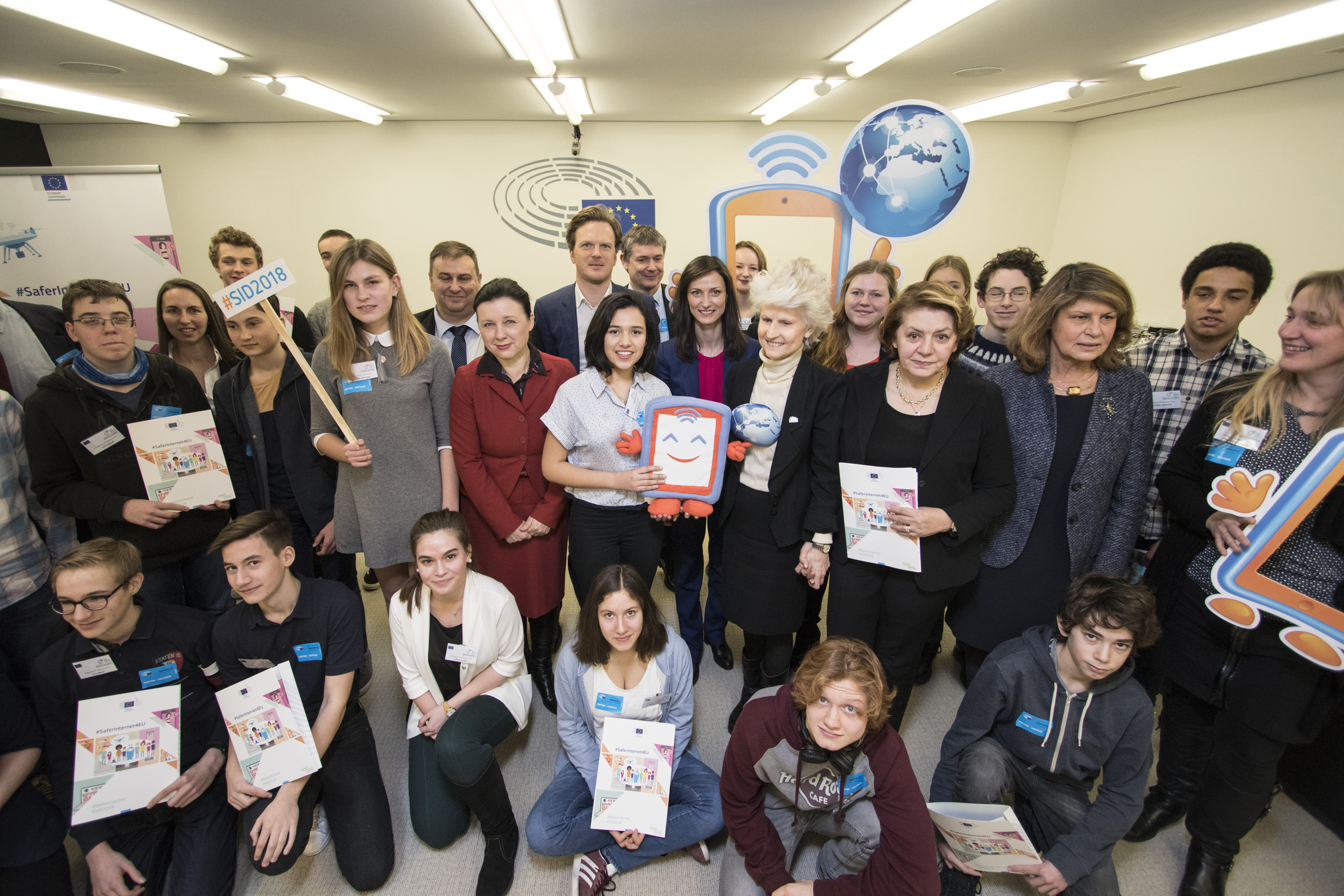 For more information on Safer Internet Day, check out the campaign website and the social media accounts on Facebook and Twitter, sharing your story of how you created, connected and shared respect for #SaferInternetDay 2018.

Only every third teenager in Latvia checks information before trusting and sharing it on the internet. More than half (57 per cent) admit they haven't learned at school how to analyse information and how to make sure the information is true. Of those who have acquired this skill at school, 49 per cent say that the information and knowledge gained has not been sufficient.

The impact of media on young people

Parents of children aged 0 to 6 have started to think more positively about the effect of media on their child, as compared to previous years. For example, a large majority now believe that media can help their child with language development and math skills, among other things. Parents also see media as a tool to keep the child occupied when they do not have the time themselves, or as a sweetener when the child is bored. In contrast, parents are less positive about the effect of media in relation to online education. More than a quarter of parents of 5-6-year-olds indicate that their child’s performance in school has suffered as a result of online education. All this is apparent from the Iene Miene Media survey 2021 that was presented during the start of the ‘Media Ukkie’ Days (26 March to 2 April 2021).

Each generation is spending more and more time behind computers, and screens are now a part of daily life. The current generation of children are using smart devices for leisure as well as for schoolwork and socialising; therefore it’s important to pay attention to the things they are doing online. Catlyn Kirna, CGI cybersecurity expert in Estonia, provides an overview of the main concerns regarding children being online, and what can be done to help them.