What is online hate speech?

"The internet has become an important vehicle for promoting racism and intolerance."

The Council of Europe defines hate speech as covering "all forms of expression which spread, incite, promote or justify racial hatred, xenophobia, anti-Semitism or other forms of hatred based on intolerance, including: intolerance expressed by aggressive nationalism and ethnocentrism, discrimination and hostility against minorities, migrants and people of immigrant origin."

The No Hate Ninja Project - A Story About Cats, Unicorns and Hate Speech video below provides more background information on what online hate speech is, how it relates to freedom of speech, and how we can effectively respond to it.

Within this context, the phenomenon of "online" hate speech is broadly acknowledged as a growing problem across and beyond Europe. The internet has become an important vehicle for promoting racism and intolerance. Hate speech through social media is rapidly increasing and has the potential to reach a much larger audience than extremist print media could previously reach. And, because of the anonymous nature of the internet, people are also likely to say things online which they would not say in person.

Childnet – a partner in the UK Safer Internet Centre (SIC) – conducted an online survey on online hate speech in the United Kingdom for the 2016 edition of Safer Internet Day. An overwhelming 82 per cent of 13-18 year olds said they have seen something hateful on the internet about a certain group in the last year, which made them angry (37 per cent), sad (34 per cent) or shocked (30 per cent).

What is online radicalisation?
Online hate speech and radicalisation are often mentioned in one breath. However, one could argue that the underlying problem and mechanisms are actually quite different.

Violent radicalisation online is a complex process whereby individuals, through their online interactions and exposure to various types of internet content, come to view violence as a legitimate method of solving social and political conflicts. Some of those violently radicalised via the internet may go on to commit acts of terrorism.

In the video below, Humza Arshad – a popular YouTube Creator for Change Ambassador, with many young fans across the world – addresses this problem in a language likely to appeal to young people. His accomplishments also show how technology is not just a cause of concern, but can also help to amplify more positive messages and solutions.

From a more practical point of view, the educate.against.hate website provides concrete advice for parents, teachers and school leaders on protecting children from extremism and radicalisation, pointing to both Islamist extremism and extreme right-wing groups. The website encourages positive debate and provides a wealth of information, including possible warning signs, which young people are vulnerable and why and the important role of prevention and education.

o Help young people develop the communication and interpersonal skills they need to dialogue, face disagreement and learn peaceful approaches to change.
o Help learners develop their critical thinking to investigate claims, verify rumours and question the legitimacy and appeal of extremist beliefs.
o Help learners develop the resilience to resist extremist narratives and acquire the social-emotional skills they need to overcome their doubts and engage constructively in society without having to resort to violence.
o Foster critically informed citizens able to constructively engage in peaceful collective action.

Within this context, media literacy approaches have proved particularly effective. Below are two concrete examples of this can be put into practice.

Trust Me
Trust Me is a resource designed by Childnet (part of the UK Safer Internet Centre (SIC)) to support primary and secondary school teachers in exploring critical thinking online. Developed in partnership with the London Grid for Learning to address the emerging area of online extremism and propaganda, this practical resource aims to provoke discussion among pupils so as to challenge them to think critically about what they see on websites and social media, as well as the communication they have with others online. 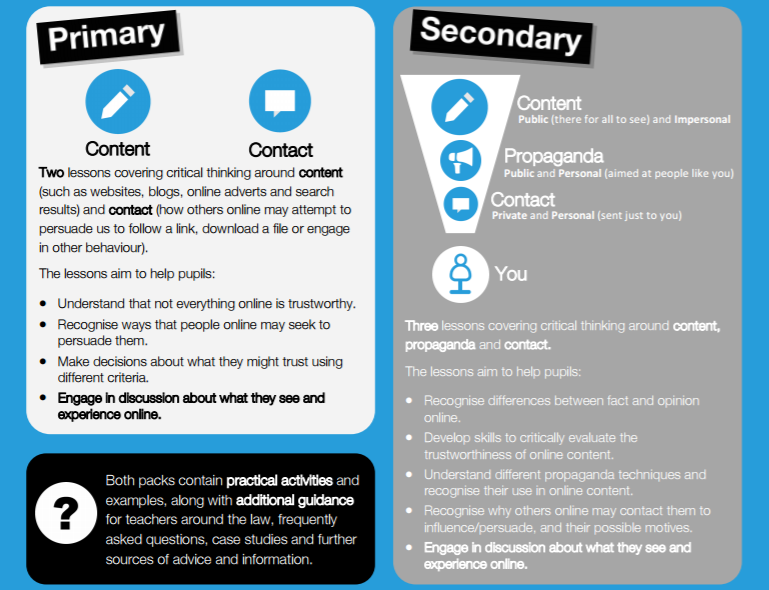 MIL for me
MIL for me is an online training resource on media and information literacy (MIL) developed by the Swedish Media Council. It contains various lesson plans and suggested methods. One module for teachers and students covers various elements of online hate and tolerance. A supporting chapter on online relationships is also available which can usefully feed into discussions on this topic.

Social and emotional learning
While critical thinking is undoubtedly important, children and young people also need the social and emotional skill set to put cognitive learning into practice and make behavioural change happen. The ENABLE project, for example, seeks to combat bullying and contributes to the wellbeing of young people aged 11-14 through social and emotional development and peer education. Likewise, a new chapter from the popular Web We Want resource, titled My well-being and yours: Respect… begins with me!, provides some further ideas on how to tackle online hate speech and radicalisation with pupils in the classroom setting.

Counter-speech and other forms of campaigning
While education is undoubtedly important, other strategies have emerged in the fight against online hate speech and radicalisation.

Counter-speech and counter-narratives
The term counter-speech refers to responses or content that is created to counter a range of extremisms and hate speech online. A counter-narrative is a tool to challenge the ideologies, narratives and stories of violent extremists. The purpose of a counter-narrative is to discredit, deconstruct and demystify extremist messages. They can do this by using logical or factual arguments or using satire and humour. They can be as specific or nuanced, as direct or indirect, as the person or group creating them wants to make them.

In the video below, Dr Erin Saltman from the Institute of Strategic Dialogue (ISD) talks in further detail about counter-speech and counter-narratives.

Other forms of campaigning
Within Europe, the most visible campaign against online hate and extremism has surely been the No Hate Speech Movement. The No Hate Speech Movement is a youth campaign of the Council of Europe. It promotes human rights online, while aiming to reduce the levels of acceptance of hate speech and to develop online youth participation and citizenship, including in internet governance processes. It has created an excellent publication - Bookmarks – A manual for combating hate speech online through human rights education – which is designed to support the educational work that will enable young people to find their own ways of addressing and coping with hate speech online. It aims to develop the understanding, skills and motivation that they will need in order to play an active role in shaping an internet which pays due respect to human rights and democratic participation principles.

The role of industry
Apart from education and other civil society stakeholders, industry also has an important role to play, particularly for the most inappropriate and/or harmful types of online content, contact and conduct.

Community standards
Against the background of continued political pressure (sometimes combined with a threat of financial sanctions), big social media companies such as Facebook, Twitter and YouTube have all put community guidelines and reporting mechanisms in place to combat the spread of (certain types) of online hate speech and extremism.

For instance, in its Community Standards, Facebook explains it is not only encouraging respectful behaviour, but it also "removes hate speech, which includes content that directly attacks people based on their Race, Ethnicity, National origin, Religious affiliation, Sexual orientation, Sex, gender, or gender identify, or Serious disabilities or diseases."

While organisations and people dedicated to promoting hatred against these protected groups are not allowed a presence, Facebook heavily relies on its community to report any offending content. Therefore, it also provides guidance on How to Report Things. If you think a message you have received goes against Facebook's Community Standards, you can report it by filling out a form. Facebook won't let the person know who reported them. However, keep in mind that not everything that may be upsetting violates Facebook's Community Standards.

Criminal law and law enforcement
In this article, we have pointed to the important role which education, civil society actors and social media platforms play in protecting and empowering children and young people online. Yet, governments have the final responsibility to make sure there is a robust system of law enforcement and criminal law sanctions in place against illegal hate speech and online content, contact or conduct promoting extremism or terrorism.

Therefore, if you have concerns that a young person is being, or has been, radicalised or incited to violence or prejudicial action, you should:

For further resources on the topic of hate speech and radicalisation, head back to the homepage of the BIK portal where we've preselected a number of resources and videos to help you understand more about this topic in our homepage carousels: 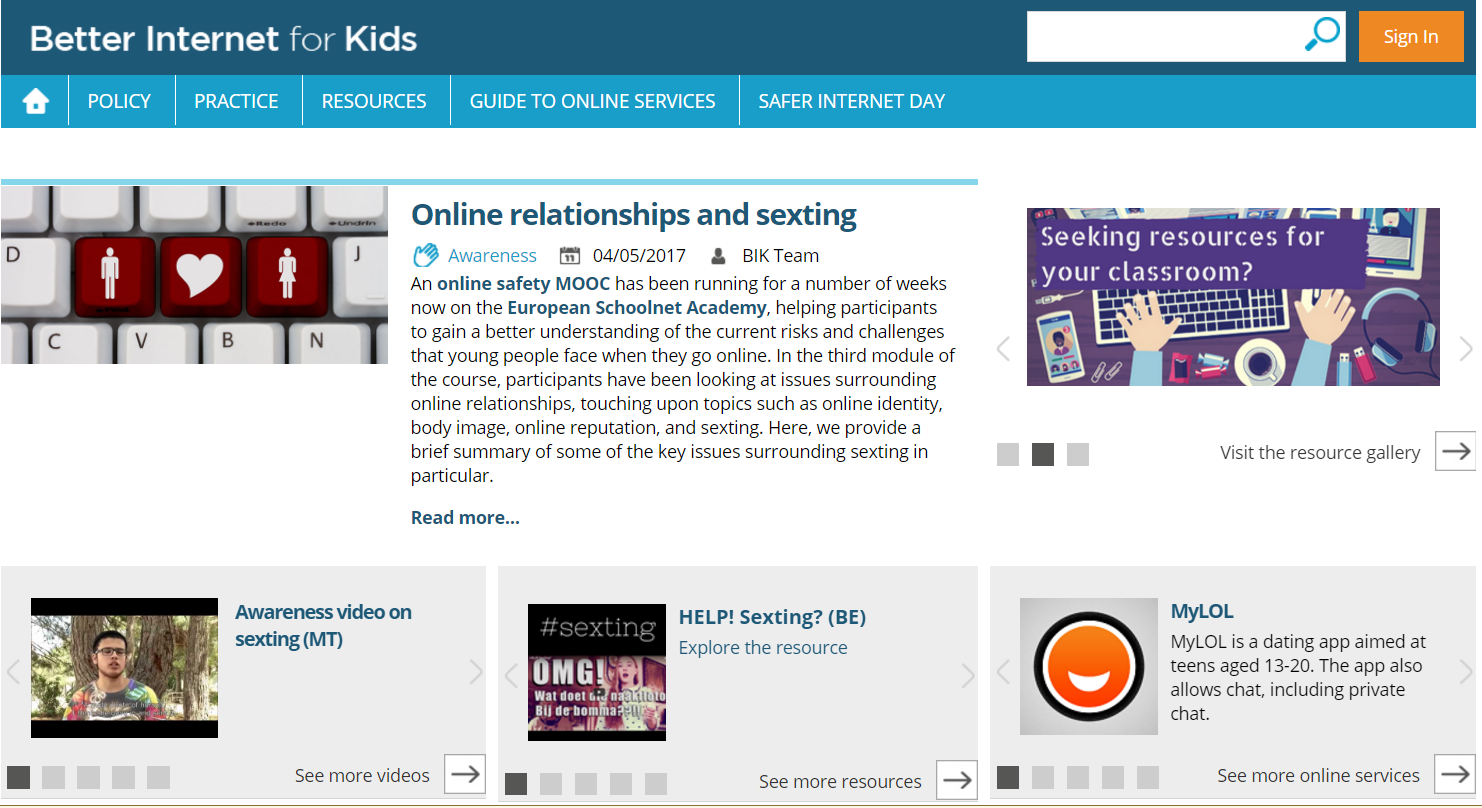 You can also read a previous BIK focus article on the topic of online extremism and radicalisation.

While the online safety MOOC on which this article is based has now ended, we hope to run the course again in the future. Keep an eye on the European Schoolnet Academy for news of a whole range of online professional development opportunities for teachers in primary and secondary schools, and subscribe to the quarterly Better Internet for Kids (BIK) bulletin for news on forthcoming events and activities specifically relating to online safety.