Children and young people have always been interested in taking up challenges, competing against others and doing dares, and the internet and social media has certainly given wider publicity to this type of activity. Things like the ice-bucket challenge and the cinnamon challenge are two popular examples which gained popularity thanks to the internet.

Several weeks ago, reports started to emerge about a Blue-Whale suicide game (BWC) which had apparently originated in Russia. Widely reported in the press, the story tells of a game in which young people are given a series of challenges over 50 consecutive days which eventually culminates in suicide. It appears that there have been some active groups in the social networking site Vkontakte which have seen gurus or curators leading young people through a range of different challenges.
Anne Collier wrote about this on her website NetFamilyNews.org and quoted Georgi Apostolov from the Bulgarian Safer Internet Centre (SIC) who has done a great deal of research into Blue Whale and found that it rather was fake and a manipulation that "can really affect parents and vulnerable children."
The media have paid quite a lot of attention to Blue Whale with police in the UK issuing a warning about the game and making it clear that it can lead to self harm or suicide. Similar statements have been made in other countries too, but some have sparked criticism saying that media coverage and warnings from police have only served to highlight something that was initially a hoax. One Insafe helpline noted that the Ministry of Education in its country had sent warnings to all schools which talked in general terms about online gaming being very dangerous and addictive. There was no information, however, which suggested that BWC could be a hoax. In Romania, after several reports of young people playing the Blue Whale game and getting injured, as well as one suicide case of an 11 year old, the Ministry of Internal Affairs has tasked the national police with delivering a series of awareness-raising campaigns in schools to inform about the risks of the game. Meanwhile, Snopes investigated the claim that Blue Whale has been responsible for more than 130 suicides in Russia and found that the claim is unproven.
A recent meeting of the Insafe helpline network acknowledged that although Blue Whale may have initially been a hoax or fake news, it is now becoming problematic. There are concerns that some young people (as well as adults) are exploiting the fear around this to encourage others to self harm and carry out various dares and post the results online stating that it was part of the Blue Whale challenge.
The French helpline (part of the French Safer Internet Centre (SIC)) acknowledged that the challenges are attracting many types of children and young people, but particularly those who are feeling depressed and who may already be susceptible to self harm. They believe that some young people have engaged in self harm in the name of BWC, which has further promoted this. Although the French SIC has no evidence to link any suicides to BWC, there is evidence to link children engaging in self harm to it.
A recent press report from France found that "ten days ago in Hauts-de-France, two young girls were cared for after telling a school nurse about their involvement in the challenge", said La Voix du Nord. "One of them had reached level 45, while the other had traces of burning and scarification on her arm."
There is a real challenge here for awareness raisers and law enforcement agencies about how to deal with the rumours. Is it best to make others aware of the issue so they are better equipped to address it when necessary – or is it better to say nothing in case this fuels further fear and concern, and possibly alerts some children and young people to the existence of the BWC and encourages curiosity and possible experimentation? Clearly the challenge element to the game could be very attractive to many young people, particularly perhaps those with depression or who are already vulnerable to self harm.
The French helpline has published an article on its website which alerts the public to the potential dangers and encourages them to call the helpline for support and further information. 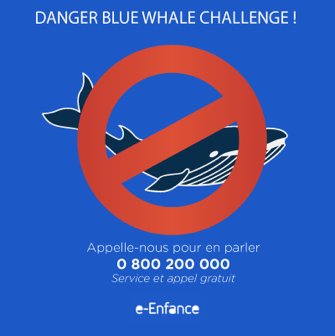 Hoax or not though, when we have children and young people in schools that are cutting the outline of a whale on their wrists (in some cases in order to get attention from others in class) and when the BWC is becoming a topic for conversation, then we need to address it.
Insafe helplines are able to provide advice guidance and support for children and young people (and their parents/carers and teachers) about anything that is happening to them online or any concerns that they have. Further information, and contact information for your local helpline, can be found here.
Share article: