We recently reported on the EC-brokered "Alliance to Better Protect Minors Online", which met on Safer Internet Day to launch its statement of purpose. Emilia from Germany attended the event as an Insafe Youth Ambassador. Here she shares her experiences from the day.

"On Tuesday, 7 February 2017, this year's Safer Internet Day (SID), representatives of various companies (such as Facebook, Twitter and Google) met with members of the European Commission in the Berlaymont building in Brussels (home of the European Commission) to discuss a "statement of purpose" for internet safety and security for children and adolescents. There were also a number of non-profit organisations active in this space present, such as klicksafe (a partner in the Germany Safer Internet Centre) and European Schoolnet, coordinator of the Insafe network of Safer Internet Centres in Europe. Two Insafe Youth Ambassadors also attended to give their input from a youth perspective… I was one of them!

"First, Insafe Coordinator, Hans Martens, reported on the global actions taking place during Safer Internet Day. Subsequently, myself and the other Youth Ambassador were invited to share our opinions on the statement of purpose with those present. We discussed important topics such as hate speech and online safety awareness raising. I called upon the companies to take the statement very seriously and encouraged them to manage security not just in the best way for them, but also in the best way for their users too.

"Dieter Carstensen, Head of Digital Child Safety at the LEGO Group, spoke of the progress made since the introduction of the statement of purpose back in March 2016. Later, representatives of the companies in attendance told about their plans to make the internet safer for children. For example, Super RTL wants to develop a children's series which will enlighten them to the dangers of the internet, with the representative of Super RTL stating: "Every day should be a Safer Internet Day." By this, they meant that we should think about the issues and challenges that can occur online not just once a year but every day, and how we can all make it a safe place for all children and teenagers." 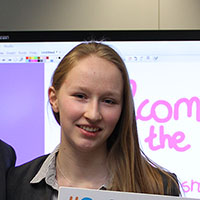 Emilia (17) lives and goes to school in Germany, and will graduate next year. She took part as a youth representative in the 2015 and 2016 editions of the Safer Internet Forum (SIF). At school, she also volunteered as a Media Scout, raising awareness and informing children about online safety risks, while working together with klicksafe (part of the German Safer Internet Centre). She takes classical singing lessons, sings in a band and plays softball, ukulele and guitar.

European Cybersecurity Month 2020 "Think Before U Click" kicks off today