The topic of rumours on the internet has been widely addressed under the label of "fake news". Young people, especially, experience the widespread existence of fake news and rumours online, as they most often rely on social networks to keep themselves informed daily.

The Austrian institute for Applied Telecommunication (ÖIAT) and the Internet Service Providers Austria (ISPA) have initiated a study, realised by the Institut für Jugendkulturforschung on "Internet rumours: How do teens evaluate information found on the internet?". In the representative online inquiry, 400 adolescents aged 14-18 were asked about how they deal with information from the internet. This was accompanied by six qualitative interviews.

Social networks and television as the main sources for information

Social networks – next to television – are the most important information resource on daily topics for young people in Austria. For 59 per cent of the respondents, social networks are one of their three most important information resources; their other news sources are radio (33 per cent), YouTube (27 per cent), and daily newspapers (25 per cent) as well as websites of daily newspapers (20 per cent). 17 per cent of the respondents indicate that they keep informed on daily topics by YouTubers and 12 per cent rely on free newspapers. Conclusively, we can observe that young people keep informed on daily politics and other news by a mix of traditional and online media. 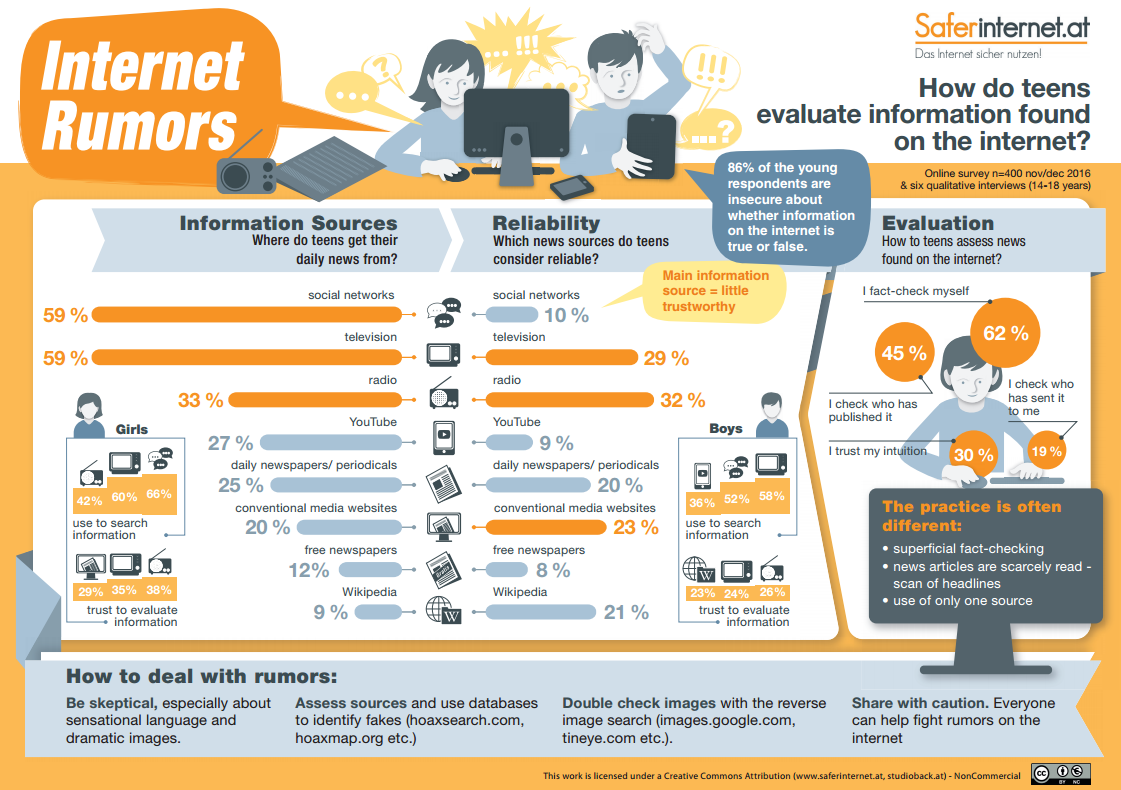 The most often used online media are considered as least trustworthy

"We observe that young people are facing a dilemma. Although they assume that social networks are not trustworthy, they are their main resources for information. Young people are aware of this contradiction, but they don't know how to deal with it", explains Bernhard Jungwirth, Saferinternet.at Coordinator.

Among the vast amount of information online, young people have difficulties to discern truth from falsehood. 86 per cent of the respondents indicate to be sometimes insecure about the truthfulness of the information they encounter. 4 out of 10 young people (38 per cent) state that this happens often or very often. Unsurprisingly, the vast majority of young people in Austria, 61per cent, consider the evaluation of information found on the internet as a big challenge.

Images have the reputation to be very trustworthy

Young people place trust rather in images than the spoken or written word. Around 71 per cent even state to be capable to judge whether an image has been edited. Still, young people scarcely consider that images might be taken out of their original context. In sum, aesthetics play an important role for young people when they judge on whether an information is to be trusted or not. A professionally-edited video accounts as more true than an unsteady smartphone recording.

The evaluation of information in the everyday practice of young people

62 per cent of young people in Austria do further research online when they are insecure about something being true or false. 45 per cent check who has published the information, 30 per cent trust their intuition and 19 per cent look at who sent them the news. Young people with higher education are more inclined to fact check the news (71 per cent).

Still, their research efforts are very superficial, as the qualitative interviews of the study show. Within a Google inquiry, young people tend to look at only the first results, the second page of results is often not even consulted any more. In the inquiry results, the focus is placed on the headlines which are considered enough to judge whether information is trustworthy or not.

The need to learn how to deal with information

There is a need for media literacy to be capable to discern true from false in the vast amount of information online.

Teachers and parents are ascribed an important role in supporting young people to build up media literacy. Young people consider them to be central contact persons. They also think that learning how to use online media in a competent way should address children already.

Around half of the respondents (47 per cent) indicate to have at least once learned at school how to evaluate information. Still, there is a need to strengthen media literacy of young people at school and within families.

Saferinternet.at supports schools and parents with learning material, workshops, trainings and a range of information services including a video series to advise parents "Frag Barbara!" (Ask Barbara!). All of the services, downloads and/or order options are available at www.saferinternet.at.

From 26 to 30 June 2022, a group of about 200 young volunteers (Young Informants) in information and awareness raising initiatives from Portugal and Spain met in Mollina, Spain to share good practices and discuss different online safety issues related to their volunteer activities.

Today marks International Youth Day 2022. Every year on 12 August, the day is celebrated all around the globe. The day was initiated by the United Nations (UN) in 1998, to bring youth issues to the attention of the international community as half of the people on our planet are 30 or younger, and this is expected to reach 57% by the end of 2030.