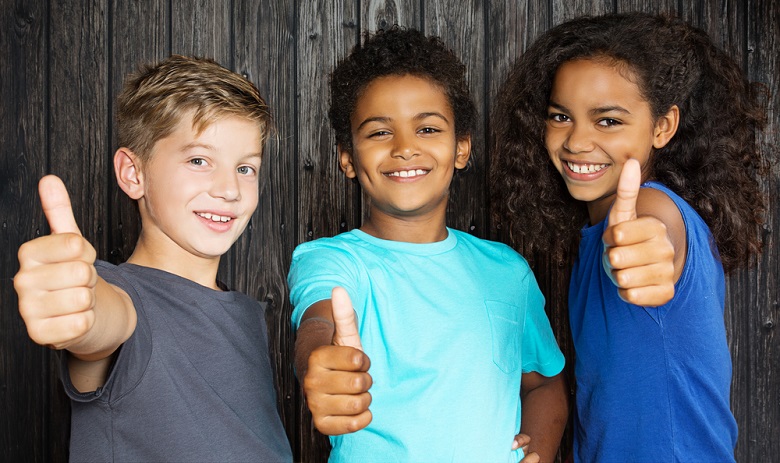 We have the opportunity to enforce this commitment through collaboration in initiatives such as the No Hate Speech Movement, a youth campaign of the Council of Europe for human rights online to reduce the levels of acceptance of hate speech and to develop online youth participation and citizenship. We support the actions of the No Hate Speech Movement through the direct involvement of several European Safer Internet Centres (SICs) in the campaign.
Austria: developing guidelines on how to deal with haters
In 2016, the Austrian Safer Internet Centre (SIC), Saferinternet.at, was established as the National Campaign Committee in the country. Prior to this year, Saferinternet.at had already been involved in activities linked to the No Hate Speech Movement campaign, including the translation of ‘Bookmarks – a manual for combating hate speech online through human rights education' (pdf, 4.2 MB) into German (pdf, 3.5 MB). The manual aims to support educators when addressing hate speech online from a human rights perspective, in both formal and informal educational settings.
Saferinternet.at has also developed a guideline on how to deal with hate posts on social media, collaborating with Facebook and several Austrian Ministries. The guideline will be launched during the course of this month.
Several other online initiatives are taking place in Austria such as the "#GegenHassImNetz" campaign organised by the Federal Chancellery, the ‘Digital Courage' campaign organised by the Federal Assembly and the ‘MeinNetz' campaign organised by the Austrian National Youth Council.
Bulgaria: developing teacher's handbooks and workbooks for pupils
As the culmination of the two-year long work on the project ‘Children, teachers and parents against hate speech and discrimination', the SIC published, in 2016, a teacher's handbook and workbook for pupils. The teacher's handbook includes 10 interactive lessons which teach children to think critically, work in teams, recognise and understand emotions, grasp the power of words and speech, and be self-assertive without hurting, offending or neglecting others. Each lesson includes learning skills for the positive and responsible use of the web, as children most often come across negative models promoting racism and hate speech on the internet and social media. The workbook contains different exercises and tasks related to each of the 10 lessons, and which necessitate active cooperation of children with at least one of their parents.
The teacher's handbooks and workbooks for pupils, which apply for all grades of primary school, were sent to over 100 schools all over Bulgaria. According to feedback received from teachers, the classes had a very positive impact on children. They became more empathic and willing to help their classmates, started to communicate more politely and respectfully, and made a conscious effort to avoid offensive and aggressive intonation and expressions.
At the moment, the methodology, the handbook and the textbook are available only in Bulgarian but if there is interest and the opportunity arises, they might be translated and adapted to the English language also.
Croatia: #lijepariječ for Safer Internet Day 2017
In Croatian, Lijepariječ means ‘nice word' and was used by the Croatian Safer Internet Centre (SIC) for its campaign against online hate speech for Safer Internet Day (SID) 2016. Working together with YouTube in Croatia, the campaign was developed with 13 youth panellists pointing out some of the worst things they have written or received on social media.
The youngsters held up signs with the negative content, showing how this also had a negative impact on their mood while, when they flipped their cards and showcased positive messages, their overall mood changed and became more optimistic so proving the importance of spreading and receiving positive messages.
The Croatian Safer Internet Centre is still promoting the campaign and will focus on developing no hate speech resources to celebrate Safer internet Day 2017.
Denmark: participating in #antibullyingweek
The Danish helpline are participating in #antibullyingweek. Many young people experience bullying both online and offline. From the work conducted by the Danish helpline and others, we know that bullying hurts and can have serious consequences for children and adolescents.
On the campaign page at cyberhus.dk/mobning-nej-tak (in Danish), children and adolescents can find different ideas how to help stop bullying. They can also join the forum and give their own version of how to say no to bullying. Throughout the week, the Danish helpline will announce the campaign on its social media channel for children and adolescents.
Germany: No Hate Speech Movement
Germany joined the international No Hate Speech Movement in 2016. On the German campaign website at no-hate-speech.de, various activities can be found: information on the phenomenon, measures of counter-speech, and a calendar of events to name but a few. The old school-style video series ‘Bundestrollamt für gegen digitalen Hass' has attracted a lot of attention and thousands of views on Facebook.
The German Awareness Centre, klicksafe, is part of the national committee of experts. It takes part in networking meetings and currently supports a series of testimonial statements. 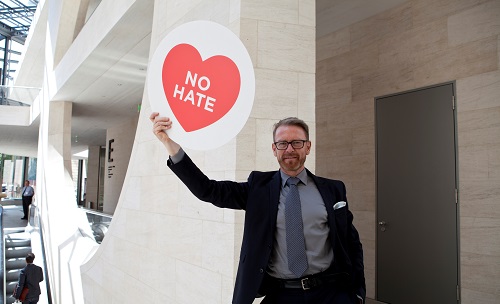 Iceland: No Hate Speech Movement
The Icelandic Safer Internet Centre (SIC) has been part of the No Hate Speech movement since 2013. Several activities have been conducted in order to tackle hate speech, which include:
Portugal: No Hate Speech Movement
The No Hate Speech Movement campaign was launched in Portugal in June 2013 and renewed at the beginning of 2016. For this new phase of the campaign, the National Campaign Committee decided to focus on the improvement of communications and making better use of online tools to give more visibility to the campaign. In addition, the National Campaign Committee will develop more awareness-raising actions for young people and the population in general, as well as conducting training sessions on human rights education and digital citizenship for educators, teachers and youth workers.
Since February 2016, several awareness sessions on online hate speech in- and with schools have been organised as well as street actions, especially in the north and centre regions of Portugal. 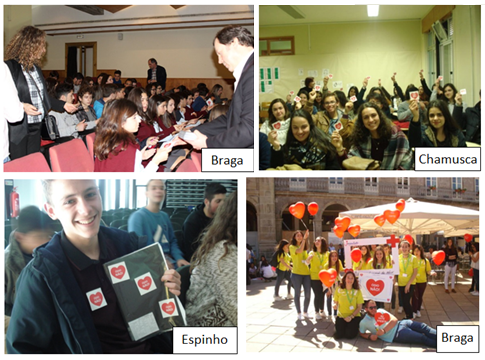 The Portuguese Campaign Committee also supports the campaign through both online and offline involvement in activities such as Safer Internet Day and European action days such as Countering Sexist Hate Speech (on 8 March), International Roma Day (on 8 April), International Day Against Homophobia and Transphobia (on 17 May), International Day for Refugees (on 20 June), European Action Day for Victims of Hate Crime (on 22 July), and International Youth Day (on 12 August).
Other activities include the promotion of the No Hate Speech Movement campaign at big events such as fairs, exhibitions, festivals, seminars and other events; the production of materials and tools in Portuguese to support the campaign's actions, including leaflets and videos (for example, the fifth episode of the ‘Net with conscience' web series). The manual ‘Bookmarks' is currently being translated and will be ready in December 2016. Additionally, the Council of Europe's Guide to Human Rights for Internet Users was translated, published and is being distributed. In many of these actions, the Portuguese Safer Internet Centre has been participating actively by supporting and/or promoting them.
Find more information about the campaign in Portugal at www.facebook.com/campanhaodionao and www.odionao.com.pt.
UK: promoting tolerance on Safer Internet Day
Safer Internet Day (SID) 2016 took place on 9 February 2016, with a theme of ‘Play your part for a better internet!'. In the UK, SID 2016 focused on young people's experiences of online empowerment and online hate, with the campaign reaching 40 per cent of UK children on the day.
Coordinated by the UK Safer Internet Centre (SIC), the campaign saw over a thousand organisations get involved to help promote the safe, responsible and positive use of digital technology for children and young people. They joined hundreds of individuals supporting the #SID2016 social media campaign to play your part and #shareaheart, which trended throughout the day and reached over 4 million people in a mass tweet on the morning of Safer Internet Day.
The UK SIC also launched a new report, ‘Creating a better internet for all', which found that more than four in five (82 per cent) of 13-18 year olds said they witnessed online hate, having seen or heard offensive, mean or threatening behaviour targeted at or about someone based on their race, religion, disability, gender, sexual orientation or transgender identity.
Schools across the UK used the UK Safer Internet Centre's education packs and Safer Internet Day TV films to explore these issues and, on Safer Internet Day itself, the UK SIC took a group of young people to 10 Downing Street before hosting a youth event at the BT Centre in London to hear young people's perspectives on how we can make the internet a kinder place and prevent online hate.
As a result of all these actions, Safer Internet Day reached 2.8 million children and 2.5 million parents in the UK. The campaign won the Safety Award at the 2016 ISPA Awards, as a result of the unprecedented reach and impact of the campaign, which has doubled since 2014.
In addition to these updates above, several Safer Internet Centres have provided us with updates on their activities related to tackling hate speech. Read their articles in the ‘Related news' section on the right hand-side of this page.
We should all reflect on how we can ‘be the change' to ensure that all users have access to an online world where the values of solidarity and tolerance are present: the annual celebration of Safer Internet Day (SID) presents the perfect opportunity to do this. Join us as we take a stand against hate speech, cyberbullying and other negative issues on the internet, instead promoting positive content online, digital citizenship and online respect as we invite you to ‘Be the change: Unite for a better internet!' on Tuesday, 7 February 2017. Find out more about the SID campaign at www.saferinternetday.org.
Share article:

As part of the “Interactive Conversations on Europe’s Future” initiative, seniors in Latvia learned about online risks and safety on the internet. From September to November 2021, events took place in 14 different cities across Latvia, organised by the European Commission Representation in Latvia, the Ministry of Foreign Affairs of the Republic of Latvia, and the Latvian Safer Internet Centre.

Mum, Dad, do you have to take another photo of me? And post it online?

Holidays are a time when we can relax, far away from the stresses of everyday life. Parents and children enjoy wonderful moments together – and we naturally want to hold on to these memories. In a matter of clicks, a couple of photos are taken and – thanks to technical possibilities – are posted directly onto social networks. Not only teenagers, but also parents are doing this more and more frequently.

SaferInternet4Kids (the Greek Center for Safe Internet (EKAD) of FORTH) participated in the recent Internet Governance Forum (IGF). Together with Maltese and UK members of the Insafe delegation, representing the network of Safer Internet Centres in Europe, representatives hosted a workshop titled "Mind the Gender Gap OR Mend the Gender Gap".