Cybercrime has been on the rise for years. Phishing traps are one of the most common tricks: an email, an SMS, a data form. How can consumers be best protected?

Awareness raising is considered a key element in the fight against cybercrime. At the Austrian Safer Internet Centre, this is the daily work of the team of the Watchlist Internet. Daily warnings provide information on current traps and the experts give tips to victims of fraud. Still, the problem prevails. People typically learn best from their own experiences, but we want to spare them that. This has motivated an innovative project in Austria: in “Beware, it’s a trap” (Vorsicht, Falle!”), fake traps are developed to lure consumers into fake-experiences as a way of raising their awareness.

Playing with the appeal of lotteries

Lotteries are attractive; winning something without working hard for it is appealing to many. Young people may consider the prospect of winning something – such as an expensive mobile phone or a trip – enough motivation to share personal data. What they don't know, however, is that by sharing their data to collect their supposed prize, they risk losing a lot.

As part of the Beware, it’s a trap! project, two lotteries which are circulating in Austria have been copied: one pretending to be from the Austrian railway company, the other pretending to be from Amazon. Both traps are authentic and contain all the clues that should make users sceptical. However, if someone gets as far as the form, the screen will display a ‘scary’ warning. This moment of fear is short-lived however; after just a few seconds the user learns that this time they were lucky. Along with the simulated trap, the user can also take a tour through the trap to learn how they should have realised earlier that this is a dubious or even fraudulent lottery.

Watchlist Internet encourage users to send these traps to their acquaintances, friends, and family. This provides an opportunity to playfully check the knowledge of those around them and to raise their awareness of the risks too! 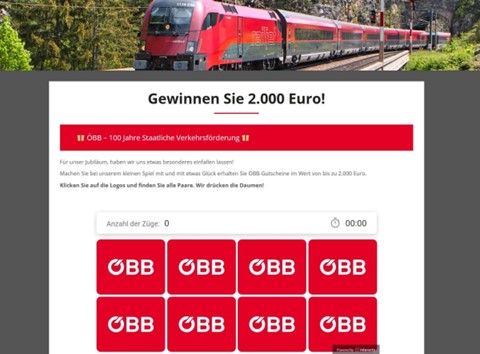 Try out the traps for yourself here: