Youth Internet Monitor 2021: Which social networks do young people in Austria use?

Every year, the Austrian Safer Internet Centre collects data on social media use of Austrian children and youth. Which social networks do young people in Austria use? Which platforms are trending, and which ones have become less popular? The results are published in the Youth Internet Monitor.

The COVID-19 pandemic made 2020 a difficult year. How did the repeated lockdowns, school closures, and the enforcement of social distancing affect young people’s use of social networks? Would the pandemic change their behaviour online? This was unexplored territory in early 2020.

The survey was conducted in November/December 2020, after the second lockdown in Austria. Children and youth had returned to school and had more options to meet their friends. A total of 400 young people aged 11 to 17 were consulted. The survey is representative of the younger generations of Austria. 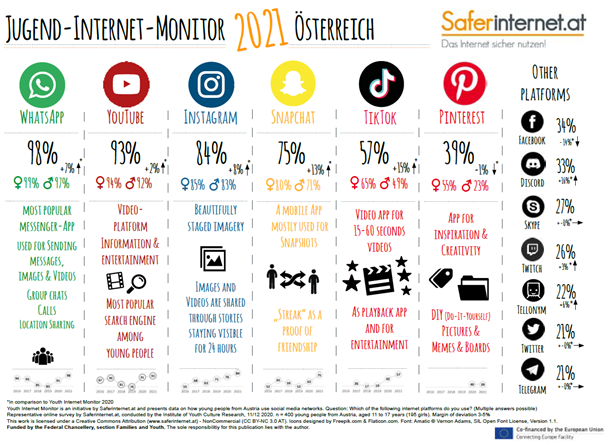 The rise of the dark social web

Young people prefer to communicate on social networks which offer them some privacy such as messenger apps, groups, emails and text messages, and other private online spaces. This is often referred to as the “dark social web” or “dark social media” – where content sharing and social networking is not done publicly (as is the case for Facebook, for example), but privately through emails, text messages or messenger apps (such as Facebook Messenger) and is less easy to track.

Increased use of Discord and TikTok during lockdowns

Two social networks, Discord and TikTok, were increasingly used during lockdowns. Discord, initially popular within the gaming community, gained users outside that sphere: teenagers reported using it to watch series with their friends on Netflix, to meet with study groups from school, or to listen to Spotify playlists together.

Equally, TikTok has surpassed YouTube’s popularity: it is now the platform where children and youth spend most of their time (daily) watching videos. It appears that TikTok has replaced YouTube as the “go-to platform” for video content.

Snapchat is still popular among Austrian young people, who consider it to be a good platform to stay in touch with friends.

To sum up, the year 2020 showed that the use of social networks is on the rise, and nearly all Austrian young people use them daily. They are useful means to keep in touch with loved ones; something which was so relevant and desired during times of imposed social distancing because of the pandemic.

Every year, the Austrian Safer Internet Centre @saferinternetat collects data on social media use of Austrian children and youth. Which social networks do young people in Austria use? Which platforms are trending, and which ones have become less popular? The results are published in the Youth Internet Monitor.

You can see the results on the Better Internet for Kids (BIK) portal at https://www.betterinternetforkids.eu/

Which social networks do young people in Austria use? Which platforms are trending, and which ones have become less popular?
@saferinternetat has collected data on Austrian children and youth and published the results in the Youth Internet Monitor.