“What do I believe? Opinion making between fact and fake” on Safer Internet Day 2021

The German Awareness Centre, klicksafe, proudly looks back on a very successful Safer Internet Day (SID) in the country. Although fewer offline events were possible due to the COVID-19 pandemic, more than 200 decentralised events took place across Germany in 2021.

For its own Safer Internet Day activities, klicksafe decided early in the planning process to focus on a digital strategy and move all activities online. For this reason, it was possible to create even more content for different target groups and bring them together on a multimedia landing page that was launched on SID 2021. This strategy paid off, as almost twice as many users visited the website on SID itself compared to the previous year.

The main focus of this year’s SID campaign in Germany was on “What do I believe? Opinion making between fact and fake”. In the run-up to Safer Internet Day, klicksafe published several lesson plans so that teachers were provided with materials to talk to young people about disinformation and fake news online.

On Safer Internet Day itself, klicksafe published the results of a representative online survey among young people (aged 14-24) to find out more about false information and news information sources. In the survey, false information can lead to hatred, agitation, and general uncertainty according to 90 per cent of the respondents, while a quarter of those surveyed also have problems recognising fake news. Around two-thirds believe that it would be easier for them to classify fake news if it were discussed at school. Although young people still get informed by traditional news media, they cite social media as the most common source of fake news.

The main action was the launch of the Safer Internet Day landing page and the kick off of the social media campaign #FaktenSchützen (in German, "Fakten schützen" can mean both the act of protecting facts as well as being protected by facts). In line with the general SID approach to include high-ranking politicians and celebrities, the page includes short video statements (from Prime Ministers of federal states, directors, and so on) as well as a new video series for young people, #FaktenSchützen, featuring well-known YouTubers (for example, MrWissen2Go, Rewinside) where they explain what fake news is, how it spreads, how to recognise it and what you can do about it. In total, the series received 118,000 views on Instagram just around SID.

Video statement by Malu Dreyer (Prime Minister of Rheinland-Pfalz, the federal state where the German SIC coordinator is located) 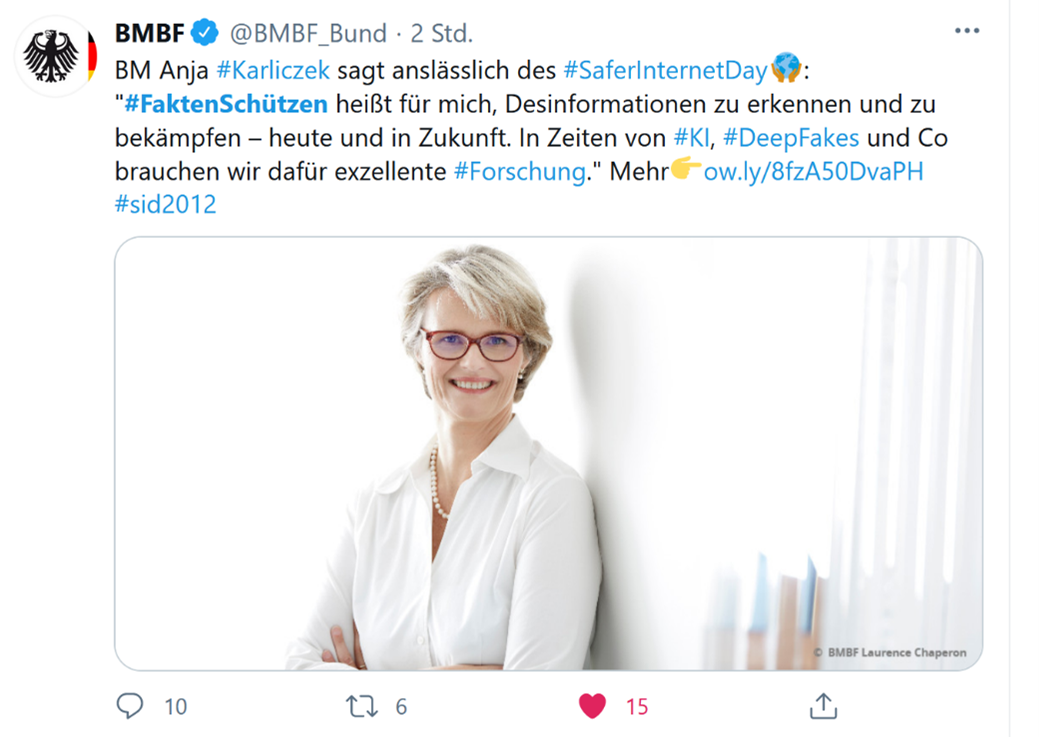 On Safer Internet Day, the #FaktenSchützen social media campaign was also launched. In short statements, participants from all sectors declare why they think it is important to protect facts. klicksafe, as well as many of the participants, shared messages on SID, which made it possible that the hashtag #faktenschützen entered the top 5 on Twitter in Germany on the morning of SID. Among the supporters were politicians, researchers, journalists, and representatives from media companies, among others. However, the focus of the campaign was not only on celebrities: with a participatory campaign (for example, templates for social media) and a profile picture generator, everyone could be part of the campaign and share their message.

For the first time, klicksafe used a Social Wall to display posts with relevant hashtags related to Safer Internet Day and also featured it on the website landing page.

Social wall with prominent supporters of the #FaktenSchützen campaign

Although klicksafe emphasised its social media communication, traditional media still played an important role in promoting SID. In addition to its own promotional activities, klicksafe was successful in raising awareness on online safety topics in the news media, including on national television (Tagesschau, heute journal).

Besides all the publicity, klicksafe also published several education materials on SID, including a new handbook “Click E for Ethics. Opinion formation in the digital world” as well as a brochure for parents "Do you still trust or are you already factchecking?", a family checklist on conspiracy theories, an interactive Actionbound game for young people (“In the bunker of lies”), an online quiz on opinion building, and several video talks with experts (teachers and authors of the new klicksafe handbook).

Several new materials were published, such as the the new klicksafe handbook “Click E for Ethics”

In summary it can be said that, despite all COVID obstacles, Safer Internet Day was very successful for the German Safer Internet Centre in reaching out directly and through the media to many people in the country to reflect on the very topical issue of disinformation and opinion making in the election year of 2021.

Background, foundation and development of the Safer Internet Ambassador network in Lithuania

The 21st century is an age where digital technologies are evolving at an enormous pace and changing people’s lives, work, and social interactions. Digital technologies offer several opportunities for improvement, including faster access to information, a more diverse and wider communication and collaboration network, easier access to knowledge – but also new challenges and risks.

“HTML Heroes: Welcome to the Internet” was officially launched in September 2021 by the Irish Minister for Education, Norma Foley TD. She commented: “To best equip children and young people to make the most of the internet, we need to begin from an early age. Like road safety, children need to know the basics of accessing the internet, how to use it effectively and safely, and to know what to do if something goes wrong and where to get help and assistance. It is my hope that this new programme from Webwise will help teachers and school staff build these foundations with pupils in an age-appropriate manner. Through colourful illustrations, stories and an online safety code that reinforces key safety messages, the new HTML Heroes Programme for first and second class is an excellent starting point for children”.