“Are you sure?!” Granny remembers everything, so does the internet

The Luxembourgish Safer Internet Centre (SIC) BEE SECURE is launching its annual awareness campaign focusing on the influence of images on the lives of young people. The campaign will communicate on four subtopics throughout the school year: self-reputation, self-expression, sharenting and sexting.

Why has BEE SECURE chosen this topic for their awareness campaign?

Children and young people growing up in today’s world can no longer imagine life without the internet, smartphones, or social media. From an early age, they not only see how media and technologies enable self-expression and self-presentation on the internet in different ways, but also the kind of importance people attach to these representations or digital identities – especially when events on the internet have an impact on “real” life.

This is not an isolated case among young people – from the student who must change schools and undergo psychological treatment after an embarrassing video of them circulated on the internet, to the boss who discovers through a simple internet search that the applicant got drunk just one week before the interview and showcased this on social media through compromising pictures. Let’s also think of the parents who post a photo of their baby on Instagram less than ten hours after birth. The story of their life is being told before the child has even had a chance to weave it themselves.

The campaign aims to get people to ask themselves certain questions before posting a photo or, more generally, content of themselves or others on the internet, to enable them to make a conscious and responsible decision by trying to assess all possible consequences. This is of course not always easy. In this sense, the campaign revolves around the question "bass de sécher?! ("are you sure?!"). This question applies in many situations when one must decide: to publish or not to publish? 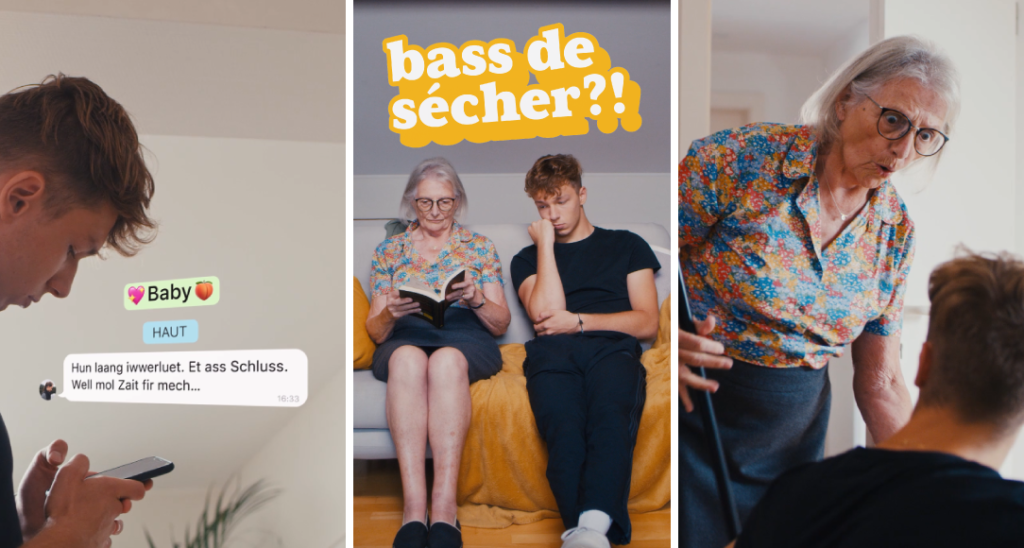 A grandmother as the protagonist of the campaign

Throughout the school year, the key messages of the campaign are disseminated among the target groups with the help of an ambassador. This positive influencer is the grandmother, a personality who often plays the role of a confidant and is supposed to embody the good conscience in the stories.

The messages are declined on video and poster supports. Thus, for the digital part, the videos will be shared on social networks such as Facebook, Instagram, Snapchat, YouTube and TikTok. For the paper part, posters will be distributed among others to structures such as high schools and youth centres.

The first video focuses on the issue of sharing nude photos without the consent of the person depicted, also known as “secondary sexting”. The key message is that people should be careful, because once a photo is on the internet, you instantly lose control over its dissemination and spread.

This can have negative consequences both for the person depicted and for the sender and others involved.

For more information about the campaign “Are you sure?!”, visit the website of BEE SECURE.